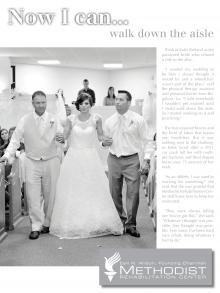 Think of Katie Breland as the paralyzed bride who refused a ride to the altar.

“I wanted my wedding to be how I always thought it would be and a wheelchair wasn’t part of the plan,” said the physical therapy assistant and personal trainer from Bogalusa, La. “I told everybody I wouldn’t get married until I could walk down the aisle. So I started working on it and practicing.”

The feat required braces and the kind of labor that leaves you breathless. But it was nothing next to the challenges Katie faced after a 2011 car crash left her with multiple fractures and third degree burns over 75 percent of her body.

“As an athlete, I was used to working for something,” she said. But she was grateful that Methodist Rehabilitation Center staff knew how to keep her motivated.