‘Such a blessing’: For spinal cord injury survivor Brad Stubblefield and wife Kristan, having children has brought joy along with a unique set of challenges 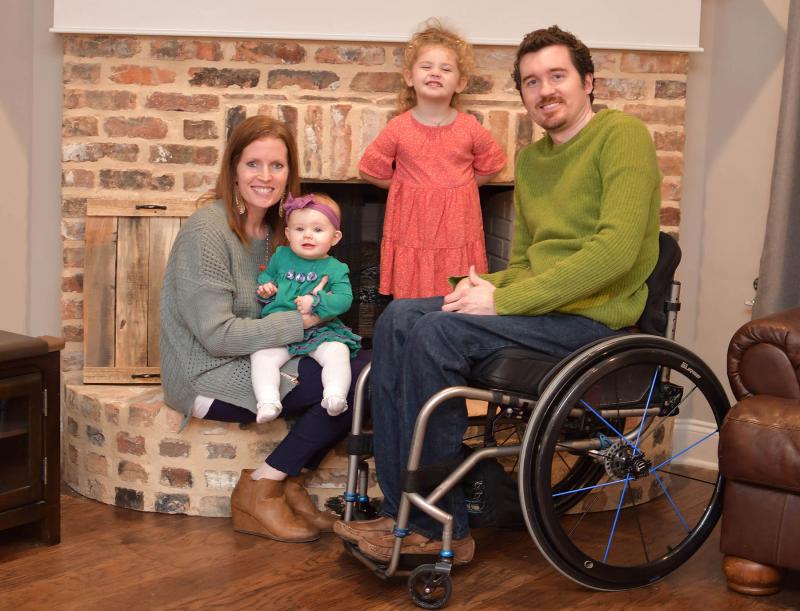 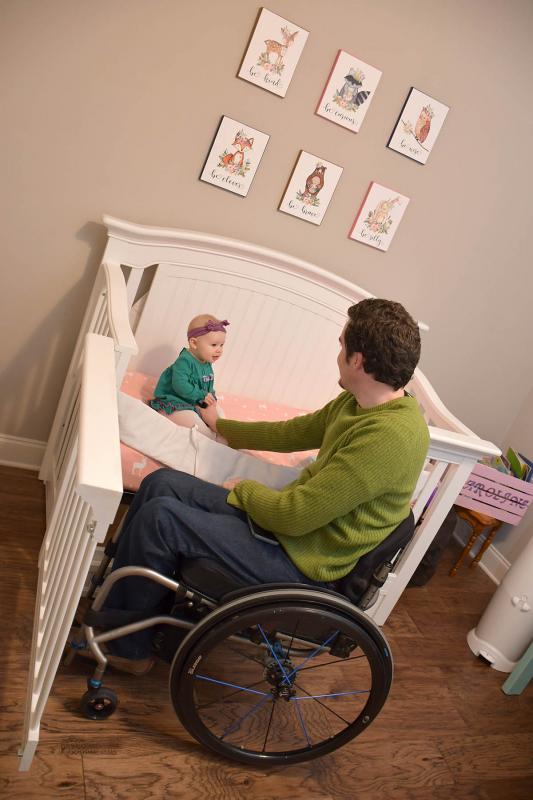 Brad Stubblefield comforts his 7-month-old daughter Savannah in the crib he customized to have a door that swings open, allowing him to pick her up while in his wheelchair.

After over 25 years working with spinal cord injury patients at Methodist Rehabilitation Center, occupational therapist Bridgett Pelts knows there is little they can’t do when they set their minds to it.

That includes experiencing the joys of parenthood.

“It is no different for them as with anyone else who wants to have a child, they just have to know there will be challenges,” Pelts said. “They have to be willing to think a little bit differently and adapt the way they do things.”

Few know this better than Brad Stubblefield of Madison. He and his wife Kristan are the proud parents of 3-year-old Caroline and 7-month-old Savannah. For him, everything from becoming a father to learning how to care for his girls from a wheelchair has been an adaptation.

The Stubblefields had been married for three years and were planning on starting a family when Brad was injured in a 2012 motorcycle accident and came to MRC for rehab.

“About a year after my injury we started talking again about having kids,” Brad said.

But because of the nature of Brad’s injury—he is paralyzed from the chest down—he is unable to father a child biologically. Many men living with SCI have issues with fertility and sexual health. Only 17 percent of men with complete lower level injuries like Brad’s are able to ejaculate, according to SCI resources on christopherreeve.org.

“From a urology perspective, MRC is a demanding patient population with complex needs,” she said. “But it’s been rewarding to establish relationships with SCI patients and help them navigate their issues, especially reproductive needs.”

Owens says she mainly sees young male SCI patients with questions about sexual health, but she has worked with some couples wishing to start a family.

“If a patient can’t produce sperm on their own, there are ways to collect it,” Owens said. “Some patients are able to be electrically stimulated to harvest sperm. Some others may be able to have an erection and produce ejaculate, but due to their injury, it flushes backward into their bladder. In this case, it can be collected with a catheter. I identify what issue the patient is having, then I often refer to a reproductive endocrinologist to counsel couples through the conception process.”

If a viable sperm sample is collected, there are different methods for fertilization. If the sperm count is high enough, an intrauterine insemination (IUI) can be attempted. IUI involves placing sperm inside a woman's uterus to facilitate fertilization.

If the numbers are low, in vitro fertilization (IVF) is an option. With IVF, an egg is manually fertilized in a laboratory setting and then placed in the uterus.

“My numbers weren’t good enough for an IUI, so we thought IVF was our only option,” Brad said.

Unfortunately for the Stubblefields, two attempts at IVF were unsuccessful. But they said an answer came when they were given the opportunity to adopt.

“When we got the call from our doctor we were super excited, and Caroline was born seven weeks later,” Kristan said. “Adopting her satisfied my desire to be a mom and have that experience, but I knew that I always wanted the experience of being pregnant.

“We tried IVF a third time with some different circumstances, but we didn’t get a better result. Then we looked into an embryo adoption and were able to do that. So both our girls are adopted, just in different ways. I was able to get pregnant and carry Savannah, and it was such a blessing.”

Kristan says that adopting Caroline first was also a blessing, as it allowed her to be an active mom from the start.

“God knows what he is doing. We got to learn how to be parents with Brad in a wheelchair with Caroline, with me not having to recover from giving birth,” Kristan said. “We were able to learn how to do things like get in a car with his wheelchair and a baby.”

As an occupational therapist, Pelts has helped several SCI patients prepare for parenting from a wheelchair, whether they already had children or were expecting at the time of their injury.

“Say someone already had a child that weighed eight pounds,” Pelts said. “So we would get a baby doll and put 8 lb. weights on it, so that we could do some therapy with them having the true feel of their baby. We’d practice lifting the doll up while maintaining control of their wheelchair. We’d practice changing diapers with the doll, too.”

She says it’s all about finding what’s best for each patient’s needs and limitations.

“It depends on the level of injury,” Pelts said. “If someone can’t use their arms fully, you have to think about if they are going to be able to do things like hold a baby or change diapers. For paraplegics, these tasks are easier because they have the hand function to do those things. For them, the challenges are things like how you are going to push a manual chair and support your baby at the same time.”

Brad says he has dealt with this very challenge.

“Because of my injury, I don’t have good balance or core strength,” Brad said. “So I am limited a lot to just using one hand. I have to keep the other on my chair to keep myself up. Not having that stability, being able to do things like pick my daughter up when she’s on the floor has been one of the bigger issues for me.”

Pelts says that there aren’t a lot of assistive devices designed for parents with disabilities, but some tools designed for able-bodied parents can be useful.

“There are some things out there, but you have to look hard for them and they can be expensive,” Pelts said. “A lot of parents in wheelchairs use a strap-on baby carrier or a baby sling, which allows them to carry a baby while freeing up their arms for operating a manual chair.”

And sometimes it just takes some old-fashioned ingenuity.

“They don’t make baby changing tables that have an opening underneath—I needed something that I can pull my chair underneath and be able to change the baby more easily,” Brad said. “I have some skills with woodworking and building things. So I built my own, so I could help my wife with changing diapers.

“And with a regular crib, I can’t reach over the railing and pick my baby up. So I cut the front of our crib in half and put hinges on it. Now the front swings open and I can get her in and out of bed. I’ve had to modify a lot of things to make everyday child care tasks easier for me from my chair.”

For Brad, who became a parent after he left the therapy gym, having good peer support has been invaluable. Being a member of MRC’s Spinal Cord Injury Support Group has connected him with other disabled parents.

“It’s mostly been trial and error for me, figuring it out on my own,” Brad said. “But I’ve been active in the support group since my accident. I have friends with similar injuries who have kids and have asked them about how they do things. I’ve also joined some spinal cord injury groups online to see how other people navigate it.”

And while Brad and Kristan say they face new challenges every day, they wouldn’t have done it any other way. Brad says he encourages anyone with a SCI considering having children to pursue it.

“It can be frustrating. You will find new limitations when dealing with your kids that are different from your everyday limitations,” he said. “You have to problem solve and find ways of doing things that work the best for you. But parenthood has been the best experience that I have ever had. It’s totally worth it. It’s amazing to see how God can grow this little person, and how you can love somebody that much.”

“Spinal cord injury care begins at the scene” Methodist Rehab physician says rescuers helped Delta farmer avoid paralysis after truck v. tractor crash
'The Lord was watching out for me': Flora hunter grateful to be walking again after suffering several fractures in 22-foot tree stand fall
Country strong: Through therapy at MRC, Kalyn Smith strives to get back to the farm, back to college and back in the saddle after a life-changing horse-riding accident
‘I didn’t think I was going to live’: Coast retiree learns to adapt after paralyzing tree stand fall
Former Ole Miss running back tackles quest to walk again with trademark determination
Stepping up: Dr. Jennifer Villacorta named Methodist Rehabilitation Center’s new medical director
High achiever: MRC physical therapist receives 2019 ASIA Research Award
Faster and better: Methodist Orthotics & Prosthetics offers free screenings for Bioness L300 Go, an advanced neuroprosthetic device for controlling foot drop
‘I did what I was supposed to do’: Meridian athlete Alixus Hearn sets goals, gives it her all to overcome paralyzing spinal injury
‘Every muscle in my body was paralyzed’: Methodist Rehab helps John ‘Bones’ Cossar reach goal to play golf again
Web design and hosting by U.S.NEXT