‘I did what I was supposed to do’: Meridian athlete Alixus Hearn sets goals, gives it her all to overcome paralyzing spinal injury 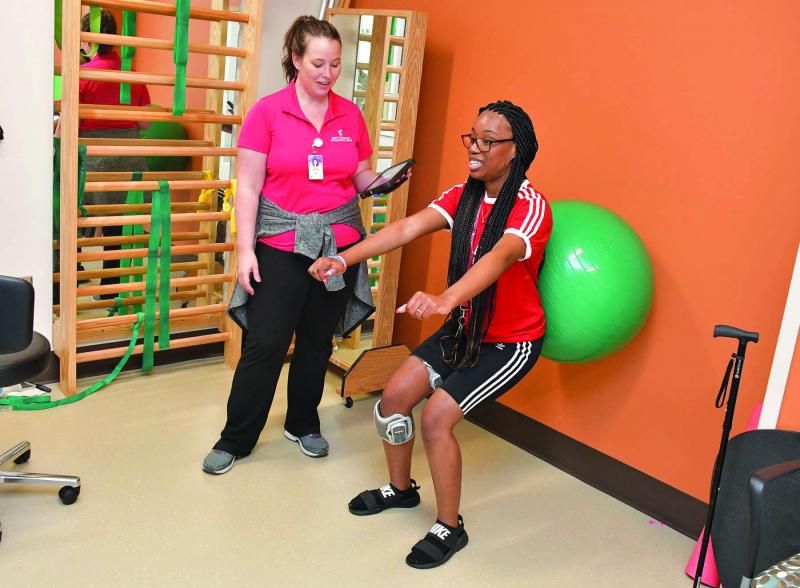 Erin Perry, a physical therapist for Methodist Rehabilitation Center’s Quest program in Ridgeland, works on strength and balance activities with Alixus Hearn. Through a variety of therapies, the outpatient program helped ready Alixus for her freshman year at Meridian Community College. Photo by Carey Miller. 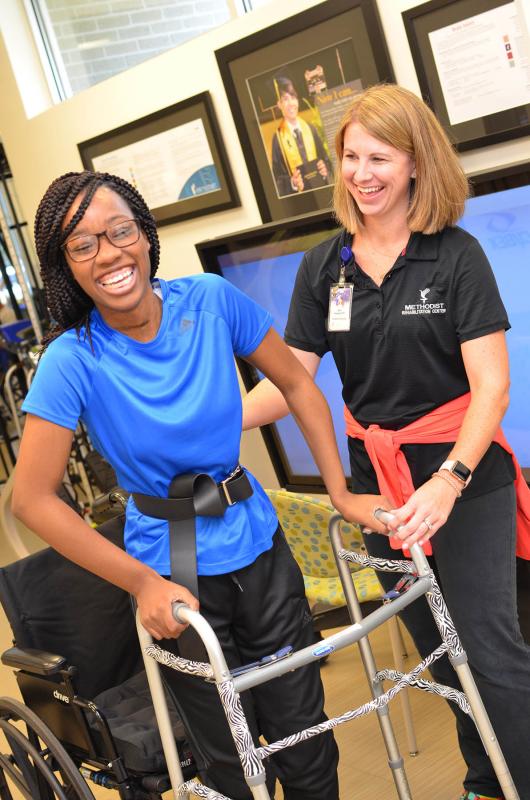 Alixus Hearn and Methodist Rehabilitation Center physical therapist Ann Howard share a laugh during therapy at the center’s outpatient clinic in Flowood. Howard said Hearn’s positive mindset made a difference in her recovery. “She was willing to try anything and do everything to get better.” Photo by Carey Miller. 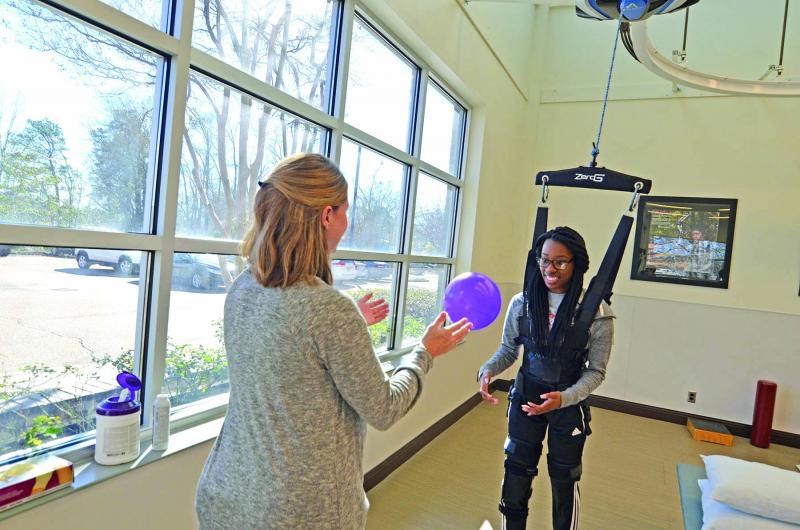 Methodist Rehabilitation Center physical therapist Ann Howard said she thinks Alixius Hearn “used every piece of equipment we have,” including the center’s ZeroG Gait and Balance System. The only one of its kind in the state, the system allows patients to practice walking, balance activities, sit-to-stand maneuvers and even climbing stairs without fear of falling. Photo by Carey Miller. 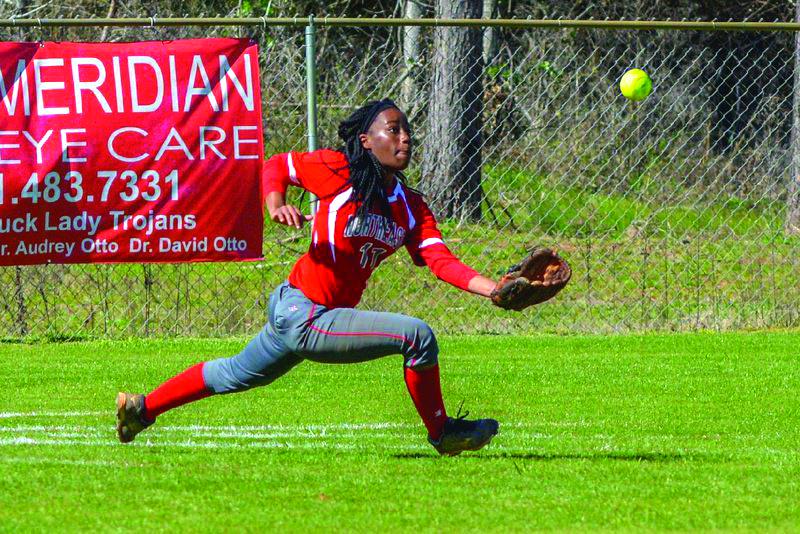 Before a paralyzing car crash made her fear she’d never walk again, Alixus Hearn was a stand-out softball player at Northeast Lauderdale High School in Meridian. Photo courtesy of The Meridian Star.

On a misty fall afternoon, Alixus Hearn crashed her car just down the road from Northeast Lauderdale High School in Meridian.

“I was heading to the field when I heard sirens going off everywhere,” said Tyler Vick, head coach for the school’s slow pitch softball team. “The principal called and said there had been an accident. And your heart just drops.”

A right center fielder for the Trojans, Alixus is someone “everyone loved to be around,” Vick said. And it hurt to tell her teammates that she was fighting for her life.

“It was the hardest thing I’ve ever had to do. At first, we didn’t know if she would make it. And the girls were heartbroken. That was one of their sisters. It was tough on all of us.”

Still, Vick had a sense that if anyone could survive and even prevail, it would be Alixus.

“It was almost like she was the one person who could overcome it and become a better person because of it,” he said.

And he was right.

After almost two years of therapy at Methodist Rehabilitation Center in Jackson, Alixus is back on her feet and doing what she does best—setting goals and checking them off her list.

“She’s the type person, once she starts something, she’s going to finish it,” Vick said. “If all kids were like that, coaching would be easy.”

“The Prayer and the Plan”

“I arrived at Anderson Medical Center (in Meridian) about five minutes before the helicopter arrived,” she said. “At the time, it did not look good.”

Thrown some 15 feet from her car, Alixus had a gaping gash in her neck. “It was so big, the surgeon could stick his hand in it,” said her mother.

More alarming was the damage to her upper spine. Injuries at the C-5, C-6 level often mean a lifetime as a quadriplegic.

“Seeing her took me down,” said Alixus’ father, Demitrius Robinson. “I was not thinking it was going to be as bad as it was.”

“They said she might never walk again,” Hearn said.

For both parents, it was hard to imagine Alixus as disabled.

She had played multiple sports for years, finally settling on slow- and fast-pitch softball as her main activity.

“I loved everything about it,” she said. “I’ve been on softball teams since the eighth grade.”

“And everything came easy to her,” Vick said. “Anything you asked her to do, she’d be able to get it done.”

Alixus’ athletic prowess would ultimately put her ahead of the game in the therapy gym.

But when she rolled into Methodist Rehab on Nov. 9, 2017, she wasn’t the same girl who easily ran down hits to the outfield. Her once muscular legs were limp and unmoving.

“She had sensation, but no motor control,” said Jacob Long, a physical therapist for the Jackson hospital.

“When I first got to Methodist Rehab, I thought I was really paralyzed,” Alixus said. “And I was sad because I didn’t think I’d make it this far. But I did what I was supposed to do and had a positive mindset. And my mom and dad didn’t let me get down on myself.”

Still, like most 17-year-olds, Alixus had her moments. When it came time to practice piloting a power wheelchair, she resisted her new mode of transportation.

“She knew she needed a wheelchair,” Long said. “But she didn’t want a power chair. She didn’t like people knowing she had a severe disability.”

Alixus had been diagnosed as an “incomplete” quadriplegic, meaning she might regain movement below her injury site.

So she began attacking therapy like she’d always approached athletics.

“She said she was going to get up and walk,” said her mother. “Every time she set a goal to do something, I’d say: ‘That’s the prayer and the plan.’”

“She was willing to try anything and do everything to get better,” said Ann Howard, Alixus’ physical therapist at Methodist Outpatient Therapy in Flowood. “She gradually started getting strength in every muscle in her lower extremities, and it seemed like each month she could do more.”

“We needed the best”

Alixus could have done her therapy at an outpatient clinic much closer to her Meridian home. But her family decided it was worth the drive to have access to Methodist Rehab’s expertise.

“Meridian didn’t have all the equipment she needed,” said her father. “They told us Methodist’s outpatient therapy was the best, and we needed the best for her.”

As a center for rehabilitation research, Methodist Rehab is equipped with technology not available elsewhere in the state. “And I think we used every piece of equipment we have,” said Howard.

First came sessions on the hospital’s ErigoPro. The device’s tilt table helped Alixus adjust to being upright, while functional electrical stimulation and robotic leg movements moved her legs in a walking motion.

Robotics also played a role when she graduated to the LokomatPro FreeD treadmill. The equipment’s harness system partially unloads a patient’s weight, while a robotic device attached to the hips, knees and ankles guides the legs in a proper stepping motion.

“When they started sending her to the Lokomat, things started returning,” said her mother. “She started taking small baby steps, and there were just tears of joy.”

In addition to several therapies that use electrical stimulation to activate weakened nerves and muscles, Alixus also took advantage of one of Methodist Rehab’s latest purchases--the ZeroG Gait and Balance System. Mounted to an overhead track, the body-weight support system allowed her to practice walking, balance tasks, sit-to-stand maneuvers and even climbing stairs without fear of falling.

Alixus also made significant progress in Methodist Rehab’s SwimEx therapy pool, which is equipped with an underwater treadmill and adjustable current.

“When she first started, I needed to get in the water with her to help her get from the chair lift to the parallel bars,” said Methodist Rehab physical therapist assistant Shari Allen. But it wasn’t long before Alixus began looking for bigger challenges.

“She was quick to ask to increase the speed of the underwater treadmill, ask about entering or exiting the pool by the steps as opposed to the chair lift and looking to reduce reliance on her arms to keep her balance,” Allen said. “As hard as things were at times, she always looked forward to that next milestone that would lead to her being independent and free to pursue her life’s goals.”

Her father said she was just as ambitious at home, and it was enough to make him nervous.

“She’d want to do stuff I was scared to try,” he said. “She was walking in the hallway at home, then we had to go outside because the hallway was too short.

“She never lost her sense of direction. She’s always been strong-willed and competitive.”

As Alixus devoted her energies to getting better, her teammates did their part to keep her pumped up. At home games, a painting commissioned by Vick hung in the dugout and her No. 13 was painted in right field.

On the team bus, the players also created a virtual shrine to Alixus. “I walked to the back of the bus and looked at her seat, and they had her jersey, cleats, the painting and her bats,” Vick said.

In an attempt to “take her a ring,” Vick said the team also made it to the final eight of the state slow pitch playoffs. “The girls were on a mission, they were playing for her,” he said.

For the fast-pitch team’s senior night, Alixus was invited to throw out the first pitch and take a swing from the plate. “So we practiced in therapy,” Howard said. “We’d take her outside and throw the ball to her.”

“She was very excited to be able to do that,” said her mother. “Softball was her life.”

On graduation night, Alixus was wheeled across the stage and stood to receive her diploma. The audience gave her a standing ovation, but Alixus didn’t like that she’d had to use an assistive device.

As soon as she graduated to a cane, “she put the walker up and parked it,” her mother said. “She told me to put it in storage. She didn’t even want it in the house.”

In anticipation of taking on-campus classes at Meridian Community College in the fall, Alixus moved to Methodist Rehab’s Quest program. Housed in the center’s outpatient therapy clinic in Ridgeland, the program readies brain and spinal injury patients for a successful return to school, work or community life.

And Alixus had the perfect attitude for the process, said Quest physical therapist Erin Perry. “She is up for being pushed and is goal-oriented and motivated,” Perry said. “When she meets one goal, she works to meet another.”

“She’s really a hard worker and helpful with coming up with good ideas,” said Quest occupational therapist Allison Harris. “I haven’t had to do as much strategizing because she’s able to figure things out at home.”

To compensate for lack of fine-motor skills in her dominant right hand, Alixus learned to write with her left and use an app to type school papers on her cell phone.

Despite her wreck, Alixus also wanted to drive again and turned to Methodist Rehab’s driving rehabilitation program for assistance.

“She drives with no adaptive equipment, which is pretty amazing considering where she started from,” said Ricotta. “She went from totally dependent to independent, and we often don’t get to see that much progress. It has been a joy to watch her progress. She’s a fighter.”

“Statistically, she should not have made the gains she made,” Long said. “She made ridiculous progress. And it’s really fantastic to see.”

Alixus hopes to become an athletic trainer and live like “nothing ever happened.”

Still, she admits the past couple of years have changed her for the better. “It really opened my eyes to you can’t take life for granted,” she said.

It’s a realization that Coach Vick wishes more of his players could obtain.

“I feel like a lot of people take things for granted, but Alixus was never one of those people. She definitely made a positive out of a really, really bad negative. I don’t know if I could have done it.”