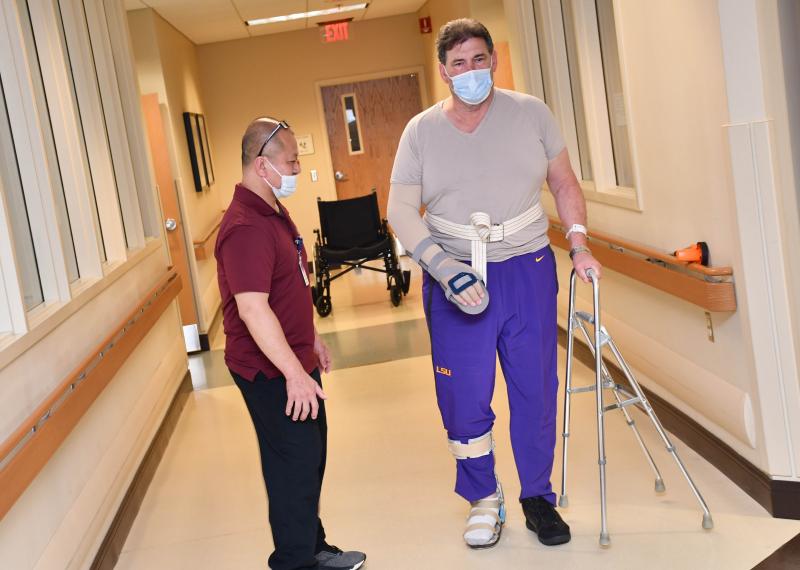 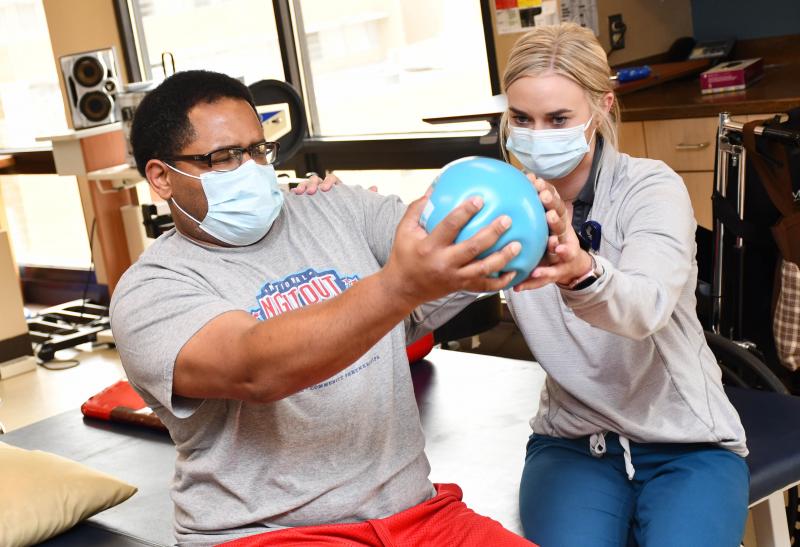 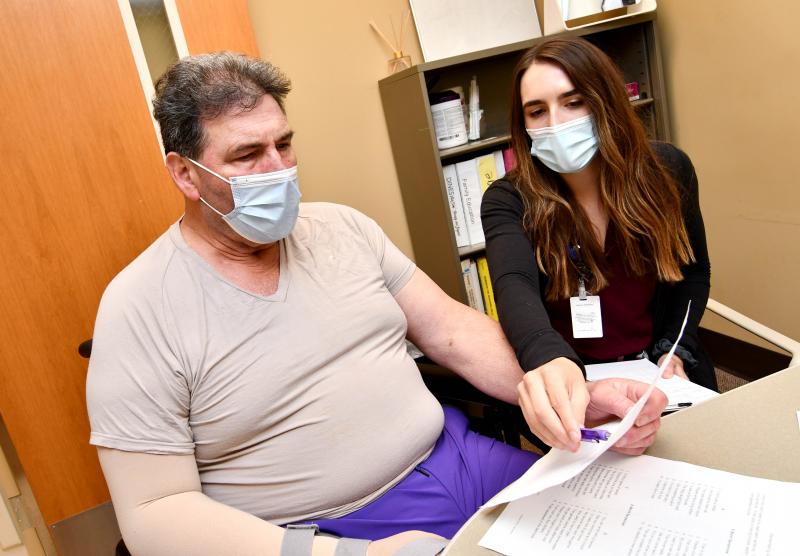 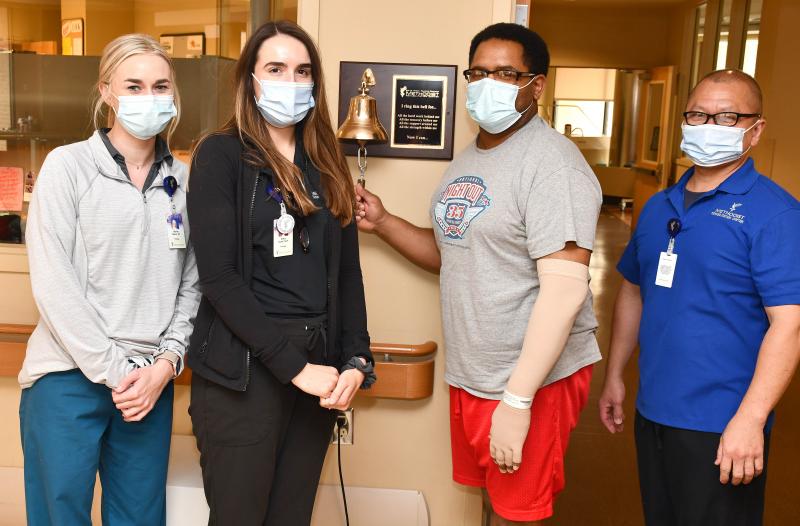 It’s now a tradition for Methodist Rehabilitation Center patients to ring a bell to mark the completion of their therapy the day before going home. Stroke survivor Derrick Freeman rang the bell as he was cheered on by his therapy team—including, from left, occupational therapist Skyler Hearn, speech therapist Abby Scott and physical therapist Boon Ong.

Though Derrick Freeman and Mike Bossetta have often crossed paths in the therapy gym at Methodist Rehabilitation Center’s stroke recovery program over the past month, neither may have realized just how much they have in common.

Both have a background in law enforcement. The 64-year-old Bossetta worked as a detective for the New Orleans Police department for 27 years, while the 39-year-old Freeman is a sergeant for the Adams County Sheriff’s Department.

And both suffered strokes despite being relatively fit and healthy.

“I take blood pressure medicine, that was it,” Freeman said. “Having a stroke was completely unexpected.”

Bossetta takes blood pressure medicine as well, but says he was also blindsided by his stroke.

“I never had many health problems before,” he said.

Hypertension is a prime risk factor for stroke. It’s however known as one of the “controllable” risk factors, meaning it can be managed with proper care and/or medication. Other controllable risk factors include diabetes, diet, obesity and smoking.

But both men had some risk factors that are not considered controllable. Age, family history, race and gender fall into this category.

For Freeman, it was his race. African Americans are 50 percent more likely to have a stroke than whites, according to the U.S. Department of Health and Human Services.

For Bossetta, it was his age. Men aged 60-79 are three times as likely to have a stroke as men 40-59, according to the American Heart Association. And that likelihood more than doubles again for men after they reach 80 years of age.

“Both of them made really great progress,” Scott said.

Bossetta had some severe speech issues that Scott helped him with.

“When he first came in, he wasn’t able to say his name or even where he was,” Abby said. “His initial evaluation had to use written cues of ‘yes’ and ‘no’ because he couldn’t do it verbally. Now, he can speak in full, albeit imperfect, sentences. He’s been able to tell us stories about his work, convey his wants and needs and even joke around with us. He’s made dramatic improvement.”

Bossetta’s near-paralysis on his right side presented a challenge to Ong as he worked to get him mobile.

“When he first got here, he needed assistance with everything—standing, moving his legs, even operating a wheelchair,” Ong said.

Bossetta’s rehab stay was six weeks. This allowed him to develop a special camaraderie with Ong as he slowly learned to walk with assistance.

“Boon did wonders for helping me walk,” Bossetta said.

He says he was also grateful to his newfound friend for giving him a haircut when he desperately needed one after being in the hospital for so long. Ong learned his scissor skills from his mother, who is a hair stylist.

“If the physical therapy doesn’t work out, he’s got something to fall back on,” Bossetta said.

“At first, he had some movement but little controlled movement,” Ong said. “I worked with him using a walker, then a cane, then we worked on walking until he got to the point he is at now.”

Hearn worked with Freeman on his left arm, which was severely weakened by the stroke.

“He had a little bit of movement, but nothing really functional,” she said. “We focused on strengthening, coordination and control. By the time he left, he had controlled movement of his hand and could pick up and grasp objects. He made great progress.”

“I feel so much more confident now, I can walk on my own,” Freeman said. “I’m still a little weak, but it’s going to come back eventually… all of my therapists were awesome.”

Both men say they were lucky to have loved ones who recognized stroke symptoms and quickly took action, likely saving their lives.

Bossetta’s girlfriend, Jennifer Boe, quickly dialed 911 when she found him paralyzed, mute and helpless as they got ready for work on March 29. And when Freeman wasn’t feeling right the weekend of April 17, his fiancée, Clarinda Tenner, recognized that his drooping face might be a stroke symptom and took him to a doctor.

“They asked me to take off my mask, took one look at my face, and sent me to the emergency room,” Freeman said.

The American Stroke Association teaches the acronym F.A.S.T. as a guide to recognizing stroke symptoms. The F stands for face drooping, a telltale sign like Freeman experienced. The A is for arm weakness, which both men experienced. The S is for speech, which, in Bossetta’s case, he was unable to speak at all. And the T stands for time, meaning that if any of these symptoms are observed, it’s time to call 911.

Both men have gone back home and will continue their recovery at outpatient clinics nearby.

Freeman is hopeful that through outpatient therapy he will continue to improve and eventually return to work.

Bossetta’s goal is to greater independence. He knows getting back to his job as a history teacher and football coach at Tylertown High School might not be possible. Although he wishes he could get back to his many students who sent get-well cards and well-wishes during his recovery, he’s still grateful for how far he’s come at MRC.

“Everybody—from the rehab techs to the nurses to all my therapists to my doctor—was fantastic,” Bossetta said. “I can’t say one bad thing about this place.”

'Thank God I'm still here': Stroke at age 35 is wake-up call for Brandon man De'Mon McClinton
“People don’t think about how important speech is”: Brookhaven man cherishes ability to talk and eat after overcoming voice/swallowing disorders at Methodist Rehab
‘They had me working’: Through inpatient and outpatient therapy at MRC, 28-year-old Trey Carroll gets back to job he loves after a rare type of stroke
Faster and better: Methodist Orthotics & Prosthetics offers free screenings for Bioness L300 Go, an advanced neuroprosthetic device for controlling foot drop
Web design and hosting by U.S.NEXT