Published on March 22, 2022
By Susan Christensen 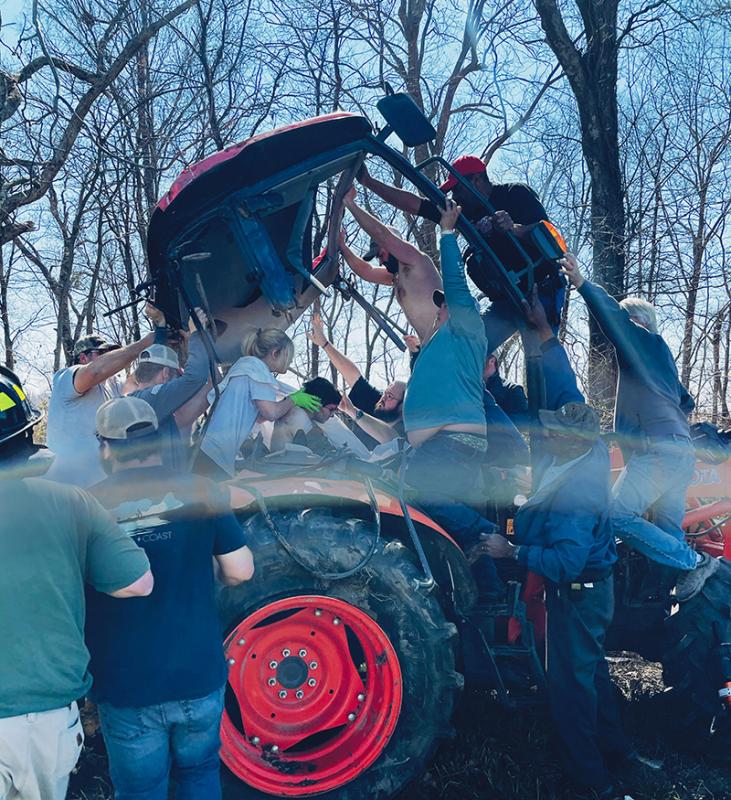 EMT Sara Moreland Hester of the Leland Rescue and Volunteer Fire Department carefully keeps Miller King’s head aligned with his spine while other department staff and King’s brother, Keith, and father, Mark, work to extricate him from a Feb. 15 wreck. “I knew one wrong move and he could be paralyzed for life,” she said. “I stayed with my hands on his face.” 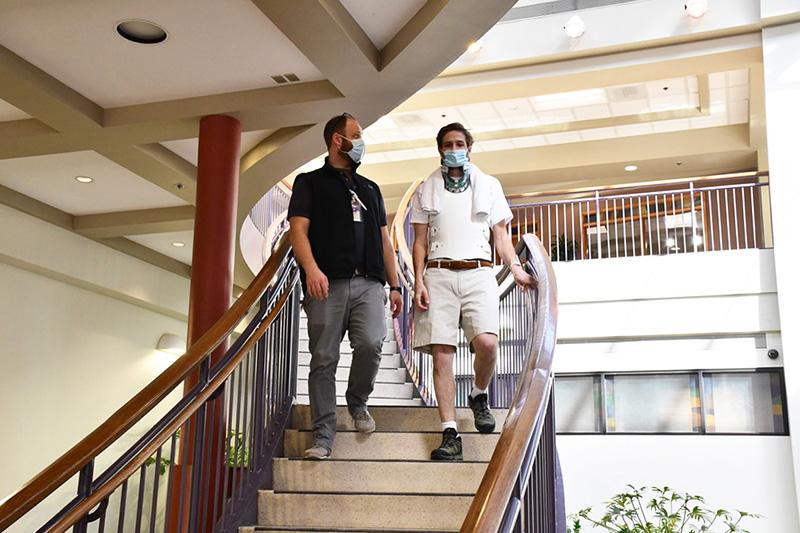 Delta farmer Miller King, at right, works on walking up and down stairs during sessions with Methodist Rehabilitation Center physical therapist and neuroclinical specialist Jacob Long. 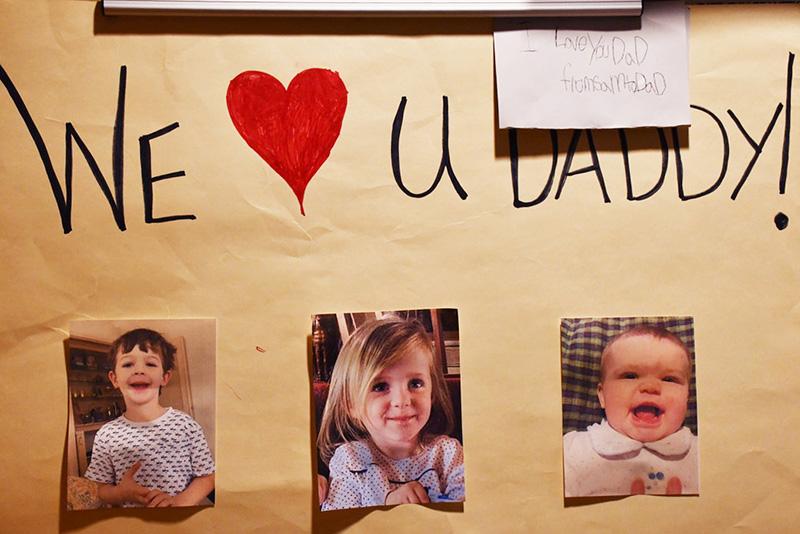 A poster from his three kids kept Miller King’s spirits up as he worked to overcome multiple spinal fractures at Methodist Rehabilitation Center in Jackson. 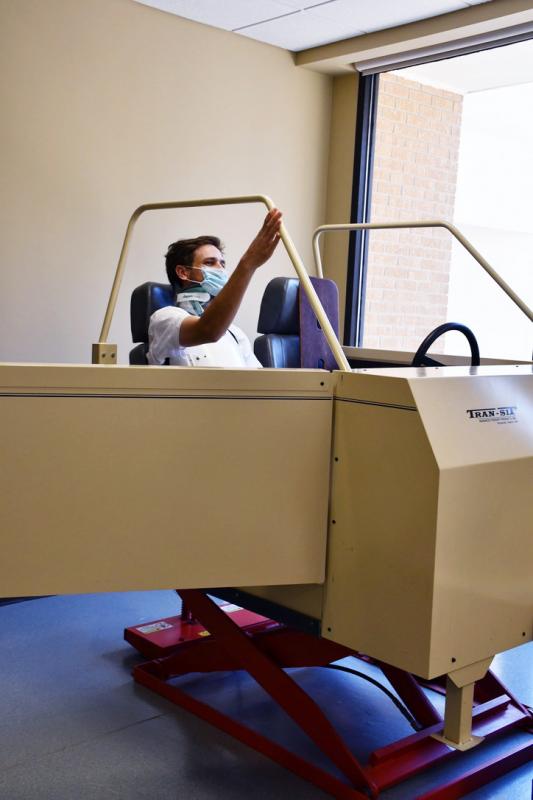 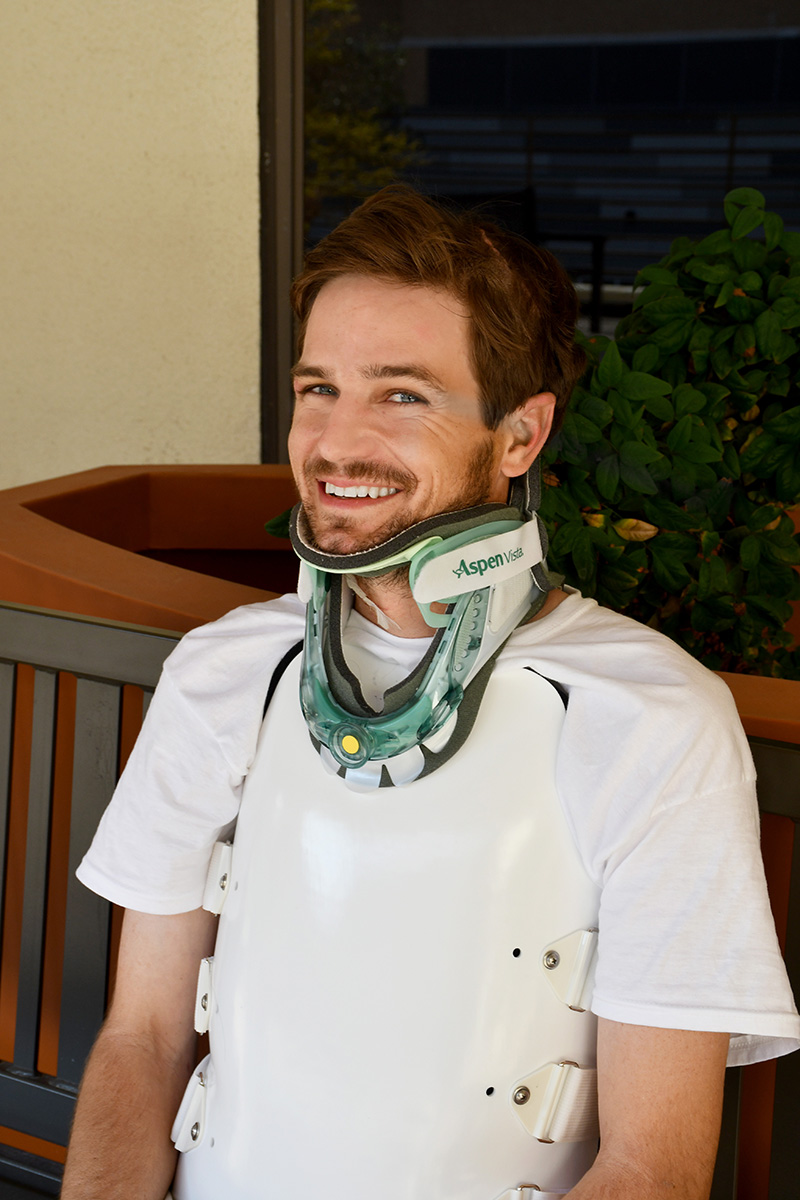 When he wasn’t in the therapy gym, Miller King loved enjoying the sunshine on Methodist Rehabilitation Center’s third floor deck.

Miller King of Greenwood had one thing running through his mind as rescuers raced to remove him from his crumpled tractor cab on Feb. 15.

“Keep breathing. You’ve got to get back to them.”

King was thinking of his wife and three kids, and whether he’d survive being hit from behind by a 1-ton, dually truck pulling a gooseneck equipment hauler.

The 31-year-old farmer broke his neck and fractured six more vertebrae—injuries that often lead to quadriplegia. But the quick actions of EMT Sara Moreland Hester of the Leland Volunteer Fire Department prevented a worst-case scenario.

“When I first get on the scene, I immediately think of spinal precautions even if it’s just a fender bender,” Hester said. And this was no minor mash-up.

“I was about a half-mile from my turn-off when the next thing I know it felt like I was in a tornado,” King said. “It spun my tractor around 180 degrees, then it rolled 360 degrees back over.”

It crushed the cab, but King remained in his seat. Hester found him still slumped over his steering wheel. His brother, Keith, and father, Mark, were already at the scene, using their shirts to stymie blood flow from a gash in King’s scalp.

Hester’s first move was to place her hands on both sides of King’s face to keep his head aligned with his spine. Then, she noticed a severe deformity in his neck. “From that moment, I knew I would not let a single person move him. I knew one wrong move and he could be paralyzed for life,” she said. “I stayed with my hands on his face.”

Her extreme caution was not an overreaction, said Dr. Jennifer Villacorta, medical director of Methodist Rehabilitation Center in Jackson, Mississippi’s No. 1 site for spinal cord injury rehabilitation. “The care he got definitely saved him from getting a more horrendous injury,” Villacorta said.

If King’s spinal cord had been injured where his neck fractured, he might have been dependent on a ventilator to breathe, a power wheelchair for transport and a full-time caregiver. Instead, he walked out of Methodist Rehab after a week of therapy.

Villacorta said such outcomes owe a lot to advances in accident scene treatment for spinal trauma patients. The protocol now is to stabilize the neck with the use of a cervical collar and to log-roll patients onto transport boards.

“All of my spinal cord lectures begin with how spinal cord injury care begins at the scene,” said Villacorta, who’s also assistant professor of neurosurgery at the University of Mississippi Medical Center.

King said the emergency care he received “is the reason I’m walking.” And it was no easy rescue.

First responders used the Jaws of Life to remove his tractor roof and extricate him. “We have a phenomenal fire department that knew how to work the machinery with their eyes closed,” Hester said. “Then we put him in an extrication device to keep him in a seated position and lifted him straight to the stretcher.”

A helicopter flew him to The Regional Medical Center at Memphis, where surgeons repaired his fractures. Then King and his family went online to find the best place for therapy. “Methodist Rehab popped up on the screen,” said his dad. “Everyone we talked to highly recommended it,” King added.

King’s care at MRC was guided by occupational therapist Stephanie Lynchard and physical therapist and neuro clinical specialist Jacob Long. Both focused on the abilities he would need to return to farming 1,250 acres and working for Southern Ag Consulting.

Long said the initial evaluation of King’s injuries “just about filled up a page.” He had multiple fractures in his spine and left arm paralysis due to nerve damage in his neck. He’d also lost 20 pounds.

“We needed to build him up,” Long said. So PT sessions focused on endurance and strengthening. “And we did a lot of balance exercises due to his plan to get back to climbing on and off heavy equipment,” Long added.

King was up on his feet “as fast they would let me.” Rehabbing his left arm proved a bigger challenge. “I really had no motion other than my grip,” he said.

Lychard concentrated on strategies to help him maintain range of motion and avoid abnormal movement patterns until the nerve heals. “I learned a lot of things to work on that I can do at home,” he said.

King can’t lift anything heavy for six months. Plus, he must wear braces on his neck and torso. “My 6-year-old has big plans to turn it into a Ninja Turtle shell,” he said of his chest-to-waist brace.

Farmers could use some super-hero protection, considering the occupation’s risks. According to the Centers for Disease Control, 410 farmers and agriculture workers died from work-related injuries in 2019. The leading cause was transportation accidents, which include tractor overturns.

User error, though, remains a threat. “The majority of time, people are doing things they know are questionable,” Hubbard said. At planting and harvest time, they’re often tired and in a hurry and might override safety features. Or they think they can handle situations like a tractor starting to overturn on a slope.

“Everybody thinks they can jump off it, but you’re not that fast. They can go over in 1.7 seconds or less,” Hubbard said.

The Farm Bureau has a variety of safety programs that are presented at venues across the state. But King is proof you can follow all the safety rules, and still be at the mercy of a random motorist.

“I had my slow moving sign on and flashing lights,” King said. “But with phones and all the distractions in people’s cars, it’s more dangerous on the highway. This is the second time I’ve been hit.”

“You always have accidents on the highway where people hit tractors,” Hubbard said. “The tractor is not driving as fast, and they are up on them before they realize it.”

In the Delta, at least, people should be more mindful of slow-moving farm equipment, Hester said. “You know tractors are all over the place. The whole highway is surrounded by farms,” she said.

Like King, she believes drivers need to pay better attention. And she has her own way of making that point. “If I’m riding with someone who’s driving distracted, I’ll threaten to put my hands over their eyes and count to five,” she said. “They freak out, but it’s equivalent to looking at a phone.”

Then she reminds them what’s at stake when they take their eyes off the road.

“Is such and such’s comments worth dying for?” she asks. “I see so many people screaming on the highway because their baby died, all because of a Facebook post they could have seen when they got home.”

All others by Lee Catherine Collins Hodges