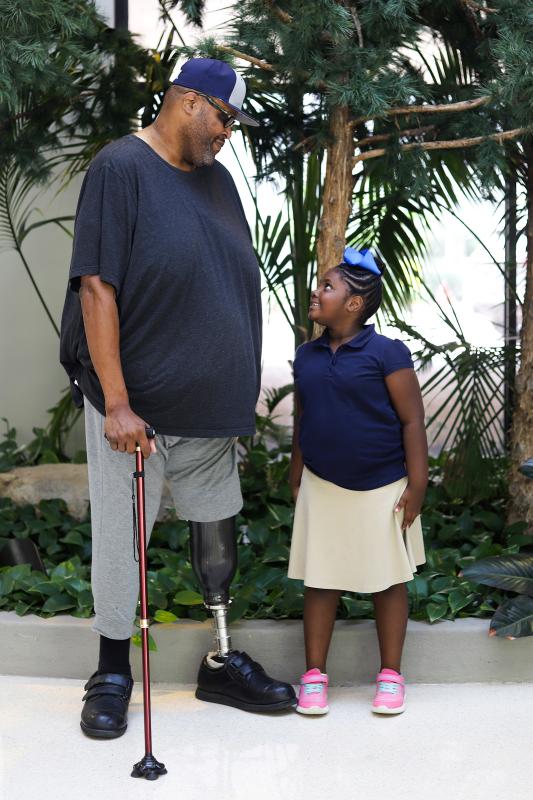 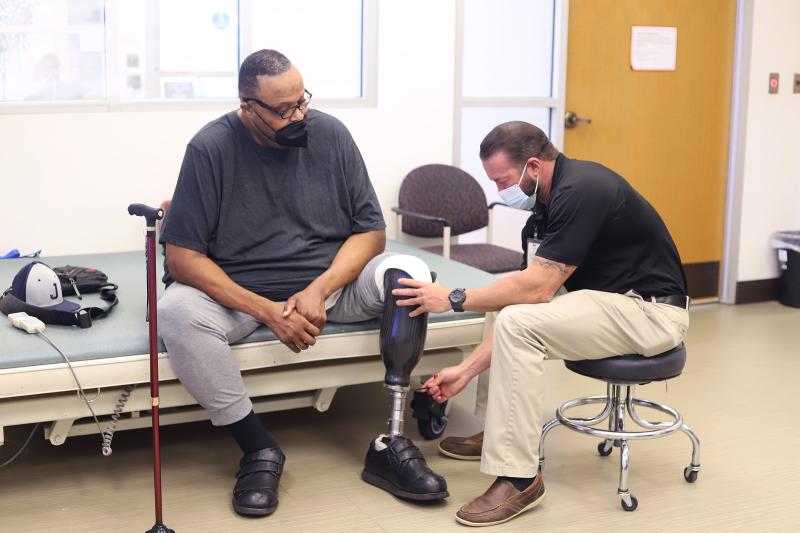 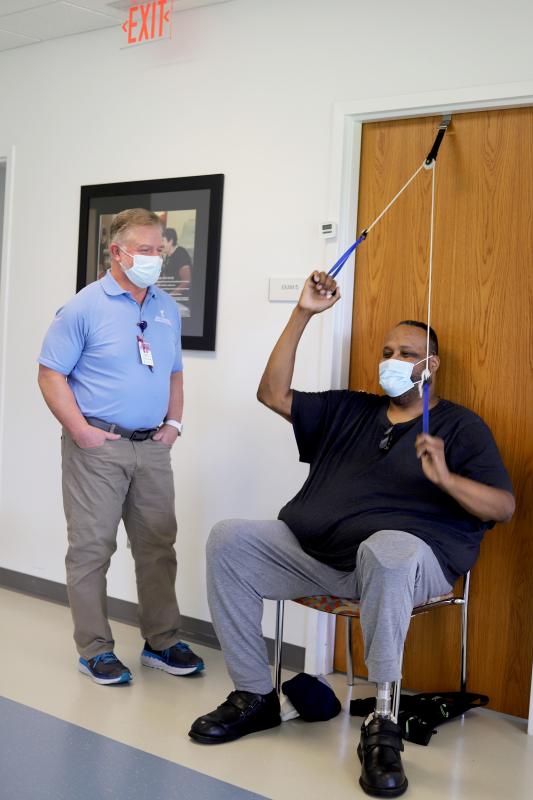 Physical therapist Steve Friend works with Carter to decrease the pain and improve the strength in his shoulders. Photo: Lee Catherine Hodges 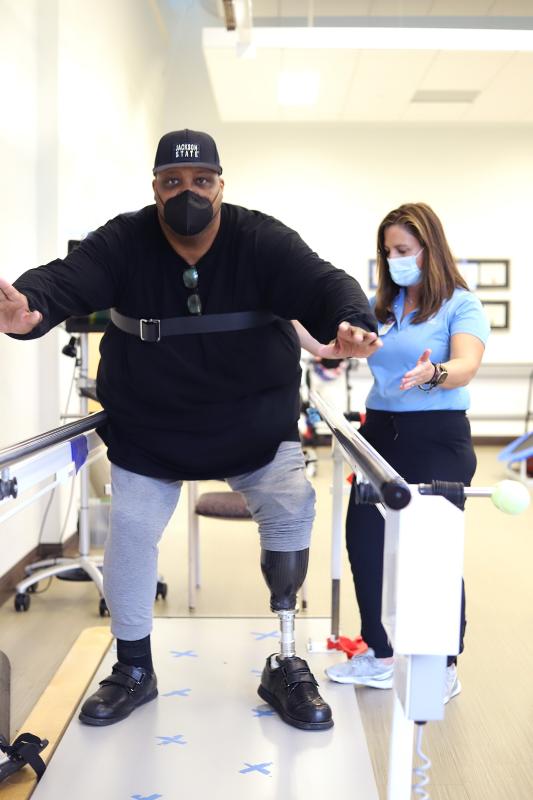 Physical therapist Amanda Runnels is helping Carter reach his goal of “making his leg be his own.” Photo: Lee Catherine Hodges

At 6-foot-9 and 400-plus pounds, Robert Carter of Jackson looks invincible.

But back in November, diabetes complications almost did him in. He was just starting to heal from a diabetic foot ulcer when he fell asleep near a space heater and burned the foot.

An infection followed that threatened to be fatal. So when doctors proposed a below-knee amputation of his left leg, “I decided to let them take it,” he said. “I was scared for my life.”

Today, with the help of a custom-designed prosthesis, Carter is regaining the physical confidence he once had as a center for Jackson State University’s basketball team. Still, it was a tall order to get the 53-year-old back on his feet.

“I knew from the minute I set eyes on him this was going to be a special project,” Moss said. “He’s the biggest patient I’ve ever had.”

While he’s slimmed down to 411 pounds, Carter weighed 465 pounds when he started working with Moss.

“I realized I’d have to order heavy-duty titanium components,” Moss said. “When we built his socket, we used double the amount of carbon fiber and lamination. And his foot is size 18, so we ordered the largest foot out there, which is 31 centimeters.”

The heavy-duty prosthesis is designed to accommodate Carter’s desire to stay active. He’d seen his father give up after an amputation at age 86, and he’s determined not to make the same mistake.

“He threw in the towel and quit. But I’ve got another 30 years, so I’ve got to get up and get going,” Carter said. “Plus, my wife, Candace, and daughter, Raelyn, added to my motivation.”

Carter took his first steps on his new leg at Methodist O&P. And despite being supported by parallel bars, “it still made me nervous,” Moss said. “That’s a lot of man. And with someone that tall, you’re usually going to have balance issues. But he’s a former athlete, and he did great.”

It helped that Carter had already gained strength during a two-week inpatient stay at Methodist Rehabilitation Center.

While there, he was visited by Kenny Buford, a prosthetic technician at Methodist O&P who also has a prosthetic leg. Seeing how freely Buford walked and knowing the quality of therapy at Methodist, Carter eagerly turned to the hospital’s O&P division for help.

“He was very excited and actually confident the first time I fit the prosthesis,” Moss said. “He stood up right between the parallel bars with no problem. And he walked step-over-step, which is rare.”

“I became super motivated at that particular point,” Carter said. “Once I was able to get my balance, oh, man, that was everything.”

Happy to have his leg at last, Carter dove into sessions with physical therapist Amanda Runnels. She works just across the hall from Methodist O&P at Methodist Outpatient Therapy. So she can easily collaborate with Moss if adjustments are needed to Carter’s prosthesis.

“Most patients spend some time in a wheelchair, but he pushed himself to walk early on,” Runnels said. “He had to get used to standing, which was hard. I think it was 30 seconds at first.”

Today, Carter does about three hours of therapy at a time. In addition to sessions with Runnels, he sees physical therapist Steve Friend for some shoulder and back strain related to his time using a walker.

“He had a lot of weight coming down on his arms, and it’s just a big compression force,” Friend said. “He ended up with rotator cuff sprain and strain. We worked on things to decrease the pain and inflammation and hopefully provide strengthening for his rotator cuff and scapula stability.”

Runnels said Carter’s biggest goal is “making his leg be his own.”

Now retired from his job as an auditor for the Mississippi Division of Medicaid, Carter said he’s “officially a house husband.”

“My priority is taking care of my daughter and getting her to her activities,” he said.

At age 6, Raelyn doesn’t always understand her dad’s new reality. “A week or so ago, she asked me if my leg was going to grow back,” he said. “Whenever I go to school, all the kids get enamored with my metal leg. They say: What is that?”

As for Carter, he sees his leg as “a godsend.” And his time with Methodist Rehab as a gift.

“I’ve enjoyed everywhere I’ve been and who I’ve dealt with,” he said. “Everybody has been positive and pushing me, and it gives you the feeling of family.”