Published on October 31, 2022
By Susan Christensen 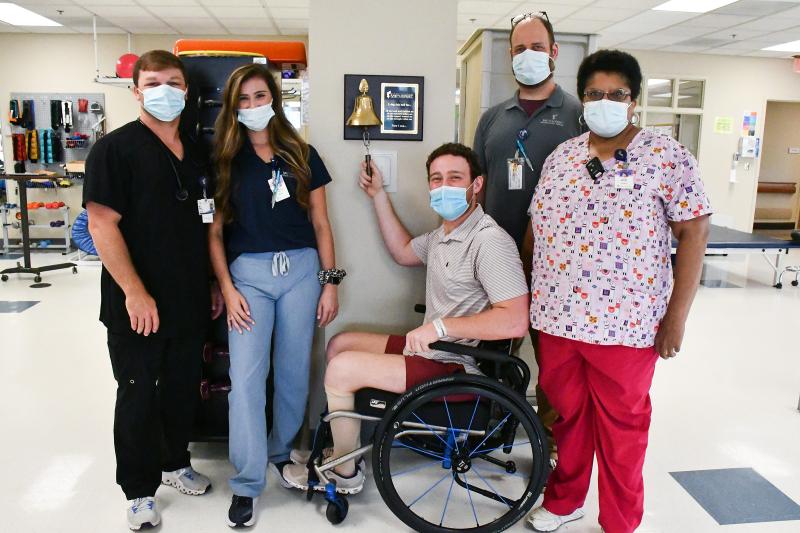 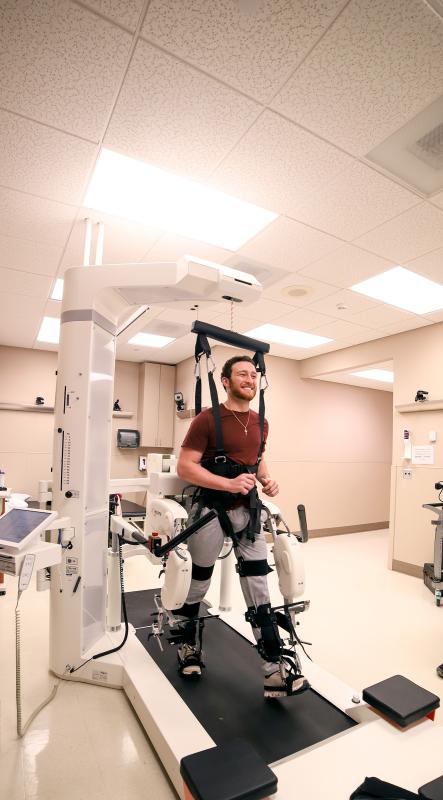 Noah Gibbs was happy to be vertical again as he did sessions on MRC’s LokomatPro FreeD, a robotic rehab device used for research and clinical objectives. Photo: Lee Catherine Hodges 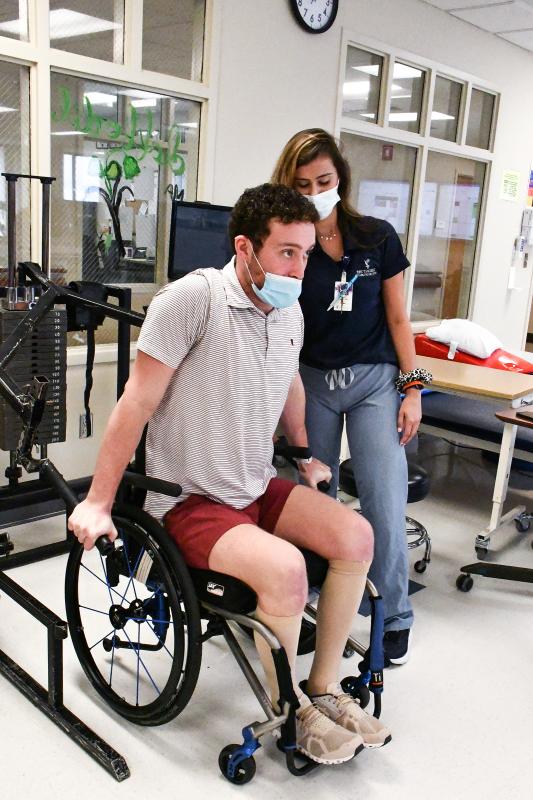 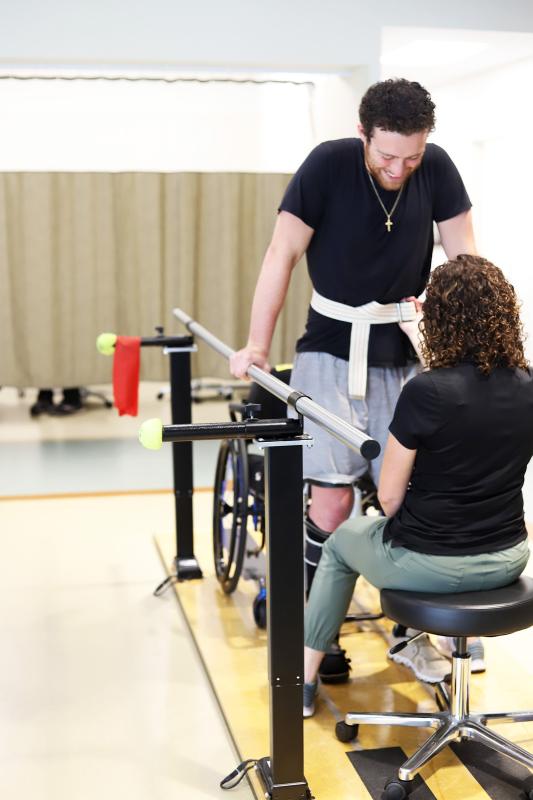 Noah Gibbs of Madison had his life mapped out.

First, he’d finish a degree in biomedical engineering at Mississippi State University, then pursue a career as an orthopedic surgeon.

But instead of a fall semester hitting the books and shadowing Starkville physicians, he’s learning about health care from an unexpected perspective. Since July 22, he’s been recovering from a paralyzing injury suffered in a side-by-side accident.

The 20-year-old was a passenger in the off-road vehicle when it flipped. “I was projectile launched from it, and I kind of spiked into the ground,” he said.

When he realized he couldn’t move his legs, “I freaked out for a second,” he said. But his analytical nature soon took over, and he began directing rescue efforts. Ever since, he’s been treating his recovery like a science project to be aced.

Methodist Rehabilitation Center staff predict that proactive mindset will take Gibbs far in his recovery. He began inpatient therapy on Aug. 5 and quickly impressed everyone with his work ethic.

MRC occupational therapist Mia Tynes said he easily managed skills that are a struggle for most paraplegics. “He could do four sets of 20 with 200 pounds on the rickshaw, upper body weight machine,” she said.

“He’s probably one of the fastest progressing paraplegics I’ve had up here,” said physical therapist Jacob Long. “It only took him about a week to get through all of his normal functional skills.”

Now at Methodist Outpatient Therapy in Ridgeland, Gibbs has advanced to standing between parallel bars with the aid of a right leg brace and his strong upper body. It’s leaps beyond what he was first led to expect.

Initial testing indicated his paralysis was probably permanent. “I’m not the type of guy to show weakness or despair, especially in front of my family,” he said. “But internally, I was heartbroken. It’s not something I could shrug off or be tough about.”

But after beginning therapy, there came a day when he had cause to celebrate. He noticed a twitch of movement in his left quad. “There was this little, small speck that I could move voluntarily. And it was like I just won the lottery or something.”

MRC Medical Director Jennifer Villacorta, who is double board certified in Physical Medicine and Rehabilitation and Spinal Cord Injury Medicine, said Gibbs likely benefitted from a variant spinal anatomy he has had since birth. Due to the way his rib cage and lower spine developed, his spinal cord likely received more protection from the initial impact of his accident.

“He was spared from what could have been a more involved cord injury,” Villacorta said. “His efforts in combination with his unexpected gift of anatomy helped him achieve a good neuro-recovery.”

By the time he moved to outpatient therapy, Gibbs was seeing expanded movement in both legs. So his initial physical therapy focused on using functional electrical stimulation (FES) devices to activate specific muscles and nerves and trigger desired movement.

“We want him to regain as much strength and control as he can in his legs, core and hips,” said physical therapist Merry Claire Wardlaw.

While he’s still early in his recovery, Wardlaw feels like “the sky is the limit” on his potential. “His story is definitely not done,” she said. “I feel like he is so clever and sharp he’ll find a way to achieve everything and anything.”

While his therapy encourages new capabilities, Gibbs is also benefitting from strategies to overcome his current physical limitations. He has a customized wheelchair and will drive with adaptive controls recommended by MRC occupational therapist Allison Harris.

Gibbs tries to apply all he’s learned to the goal of “getting a little better every day.”

There’s no doubt he’ll do whatever it takes, said his mom, Emily Gibbs. “He’s always gone 125 percent in everything he does,” she said.

“I want to be as independent as possible”

A former football player for Germantown High School, Gibbs brought an athlete’s mindset into the therapy gym—plus a whole cheer squad. He has three siblings, including a fraternal twin, two very supportive parents and a girlfriend.

Gibbs’ need for his family’s encouragement is the primary reason he came to MRC. He originally planned to go to Shepherd Center in Atlanta. But when word came he’d only be allowed one visitor, he was in turmoil. “I couldn’t choose between my mom, my dad and my twin,” he said.

Now, he thinks: “It was a sign from God that Shepherd fell through, and I ended up at Methodist. Obviously, I made the right choice for my family, and Methodist Rehab has great resources.”

More than $1 million in robotic rehabilitation devices are housed in MRC’s research department, the Center for Neuroscience and Neurological Recovery. And Gibbs was soon trying out two of the devices—the ErigoPro and the LokomatPro FreeD.

The ErigoPro combines three therapies in one—a tilt table, functional electrical stimulation and robotic leg movements. The Lokomat is a treadmill that uses a harness system to partially unload a patient’s weight, while a robotic device attached to the hips, knees and ankles guides the legs in a proper stepping motion.

Both provide therapeutic benefits. But Gibbs also saw the devices as a window to the world of biomedical engineering. To learn more, he asked if he could shadow MRC biomedical engineer Bonnie Perry, whose role is to bridge the gap between technology and therapy.

“A lot of technology is poorly understood when it comes to how to apply it and to whom to apply it,” she said. “My job is to try to understand the interaction between the human and the device and translate that into something useful for the therapists.”

Perry said Gibbs’ biomedical engineering background likely gave him an edge as he analyzed how technology was impacting his anatomy. And if he continues in biomedical engineering, “he is going to have a leg up on other students,” Perry said. “Because he has seen the therapy in action, it’s not just a theory on a page.”

Gibbs also met with Dr. Keith Tansey, a senior scientist in MRC’s NeuroRobotics Lab and a long-time researcher and educator in the field. After learning of Gibbs’ career interests in biomedical engineering and orthopedics, Tansey arrived with a sheaf of med school lectures in his hand and some illustrations about how the fields intersect.

“This is someone who really cares about what he does, not only for patients but for the future of medicine,” Gibbs said. “I was very happy to make his acquaintance.”

Tansey, in turn, found Gibbs “a glass half full kind of guy.”

“He’s facing a very scary, unknown future, and I was impressed both with his optimism and his enthusiasm for learning,” Tansey said. “He seems like the kind of guy who is going to carve something out of life for himself. If anything he has been motivated by his clinical experience. He’s already interested, and now he has more reason to dive in head over heels to study this stuff.”

Gibbs plans to return to MSU with the help of Quest, an MRC outpatient program that helps people make a successful return to school, work or community life.

As for medical school, “there’s no reason for those dreams to be given up,” Villacorta said. “He may have to figure out a different way of doing things, but it is also usually in the unique or different that we unexpectedly find greatness. In his case, his prognosis will be defined by his own persistence.”

And there’s no doubt he has the incentive to succeed. “I want to be as independent as possible to make my family proud and make my therapists proud,” he said. “I wake up every day for therapy hyped like I’m going to play a football game. I want to learn everything and do everything.”