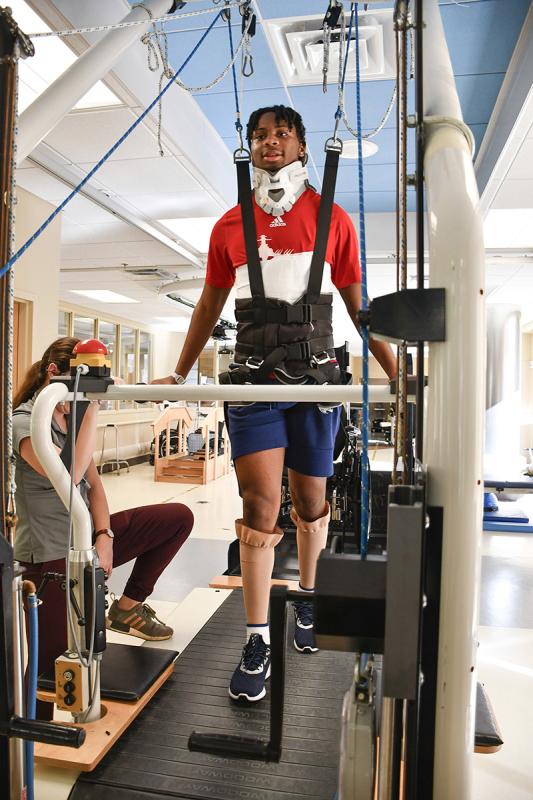 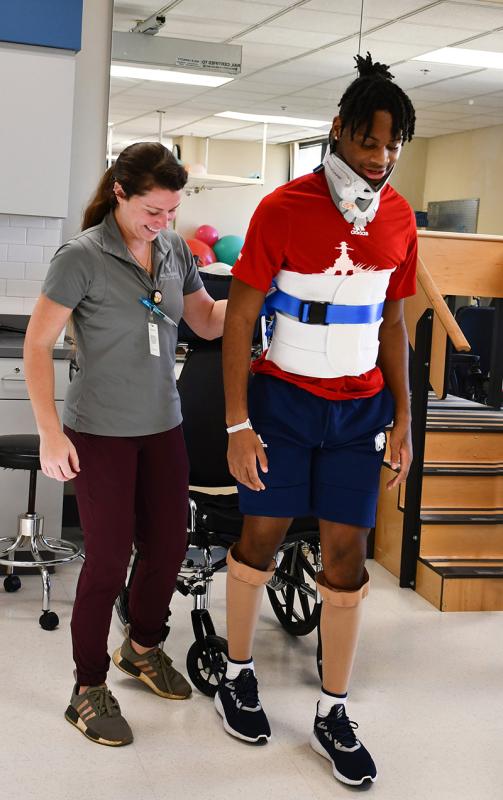 Martin and Russell practice walking by making laps around the therapy gym. Over the course of his stay at MRC, Martin progressed from being unable to walk at all to walking in 10–to 15-minute intervals. 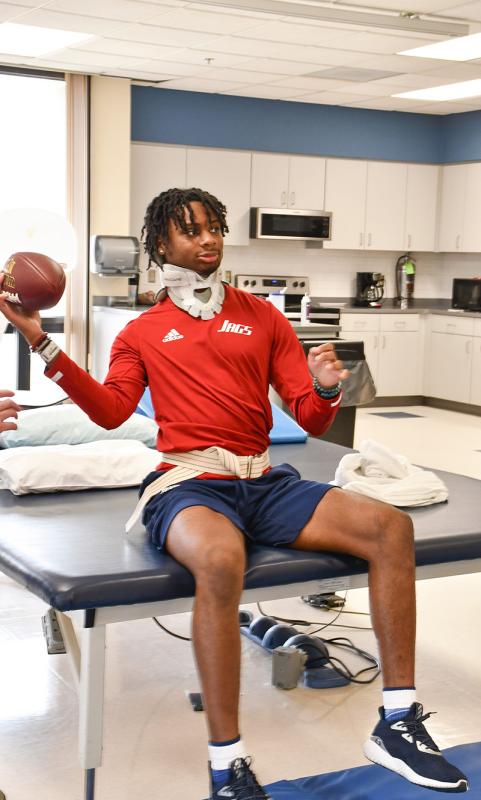 Martin’s occupational therapy largely focused on restoring his hands and perfecting his balance. Throwing a football was the perfect task to practice both simultaneously. 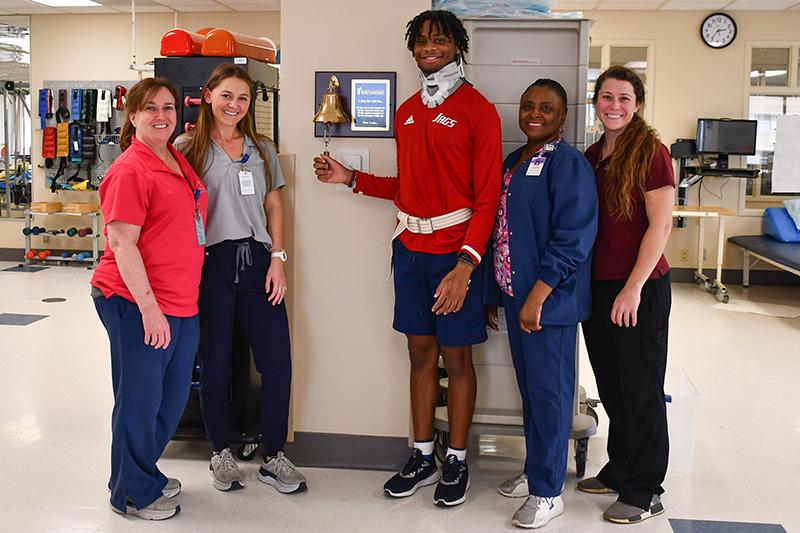 Beads of sweat glisten on Marvin “M.J.” Martin’s face. The 19-year-old is no stranger to an intense workout. He’s played football since he was a child, practiced in scorching heat and pushed his body to the limit time after time.

“I love football, and I’ve put a lot of work into it throughout my life,” Martin said.

This workout is a little different. Instead of his coach, Martin’s taking orders from a physical therapist at Methodist Rehabilitation Center in Jackson, Mississippi. She’s urging him, “faster,” and taking every shaky step with him. No pads, just a neck brace. The sixth-floor therapy gym is lined with patients and their therapists. Martin’s struggle is evident, but so is his surprising speed. It’s no stadium, but it will do––athletes attract an audience.

On Oct. 25, Martin suffered a spinal cord injury after a tackle in football practice. At that moment, the University of South Alabama safety said his “body went limp.” Face first on the ground, Martin realized he couldn’t move. His neck injury had damaged his C3 and C4 vertebrae, which can lead to paralysis from the neck down. In the ambulance, a lack of sensation changed to painful burning and tingling in his legs. Martin called his mom, Dorothy, to ask her to pray.

For two weeks in the ICU in Alabama, Martin could not sit up in bed. Hours from his hometown of Vicksburg, Mississippi, he dealt with intense pain and grew increasingly concerned that he couldn’t move his left leg or right arm. When it was time to decide where to recover, Dorothy knew she needed the best choice for spinal cord injury rehab as close to home as possible.

“I knew that M.J. needed his family to get over this,” she said. “There needed to be somebody there with him all the time.”

From day one in the therapy gym, Martin’s audience consisted not only of amazed therapists and other patients, but of aunts, uncles, cousins, siblings, his parents and girlfriend. They filled his room on Thanksgiving and celebrated their holiday in the hospital. They coached him alongside physical therapist Lauren Russell, who rallied behind Martin’s goal to walk out of Methodist Rehab on his discharge date.

Russell’s customized approach to Martin’s therapy was familiar to him: tough love. A college athlete herself, Russell didn’t coddle. Once his vitals were steady, Russell put Martin on an overhead support treadmill, early into his therapy stay at MRC. The treadmill—which uses a harness, pulleys and a pneumatic system to support a patient’s weight—allowed Russell to place each step while therapy technician Melaina Megues held Martin in place.

Not many spinal cord injury patients at MRC can tolerate that much exertion that quickly. But Russell felt that because of Martin’s age and athleticism, it was best to get him walking as soon as possible.

“There is research to support high-intensity gait training,” she said. “I wanted his body to naturally adjust. We walked fast so he didn’t have time to pick apart every moment and movement.”

With a plan to steady his steps decided, occupational therapists Stephanie Lynchard and Reagan Hall focused on Martin’s upper body. Initially unable to lift his arms or use his hands, Martin could not complete his own self-care.

Martin’s occupational therapy team identified which skills he had retained through his injury and which skills he would need help to restore. Lynchard prioritized strengthening and self-care training to ensure Martin could meet the basic needs of feeding himself and getting dressed. As his strength progressed, Lynchard guided Martin through increasingly complex tasks.

“Even with some limitations of his hand function, he was eventually able to complete all of his self-care tasks with very little assistance,” said Lynchard.

With the whole hospital as his audience, Martin made unparalleled progress. He arrived with his arms hanging limply at his sides and left MRC able to text. He went from having Russell place his steps on the treadmill to running on it.

It’s a noteworthy recovery considering the plight of many others injured playing sports. According to the National Center for Catastrophic Sport Injury Research’s data for 2021, 59 percent of the patients injured in football did not recover from their injuries. Of those with a spinal cord injury like Martin’s, only two of five recovered.

Given the location of Martin’s injury, the damage could have been life-changing. Losing control of those muscles doesn’t just mean limitations on walking and gripping––it usually means being unable to breathe without assistance. With so much on the line, Martin had every reason to lean into fear. Instead, he handled his injury with determination.

Martin would like to thank his therapy team for pushing him through his journey at MRC. He’s grateful for their expertise and for understanding how he performs best.

Of course, Martin thanked his family for the support they’ve shown him. “They are what got me through this,” he said. “They always brought me laughter and joy.”

Surrounded by new friends and his family, Martin rang the end-of-treatment bell at MRC and walked out its front doors unassisted on his discharge day, reaching his goal and then some. Martin plans to add more fans to his MRC audience, continuing his recovery with Methodist Outpatient Therapy.

Martin leaves a lasting impact on his audience back at the hospital. With his “never back down” attitude and quick wit, he thrilled his therapists and charmed his whole team.

“The discipline he has as an athlete––it’s impressive,” said Russell. “But the trust he has had in me through this whole process––man, that is what means the world to me.”