'He's a miracle': After near-fatal brain injury, Houlka's Undray Love is walking, talking and 'taking every day as blessing'

Published on November 16, 2020
by Susan Christensen 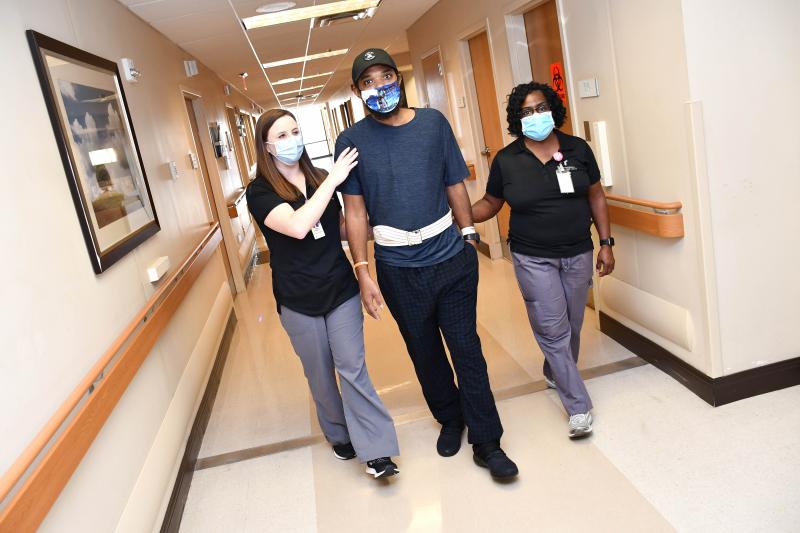 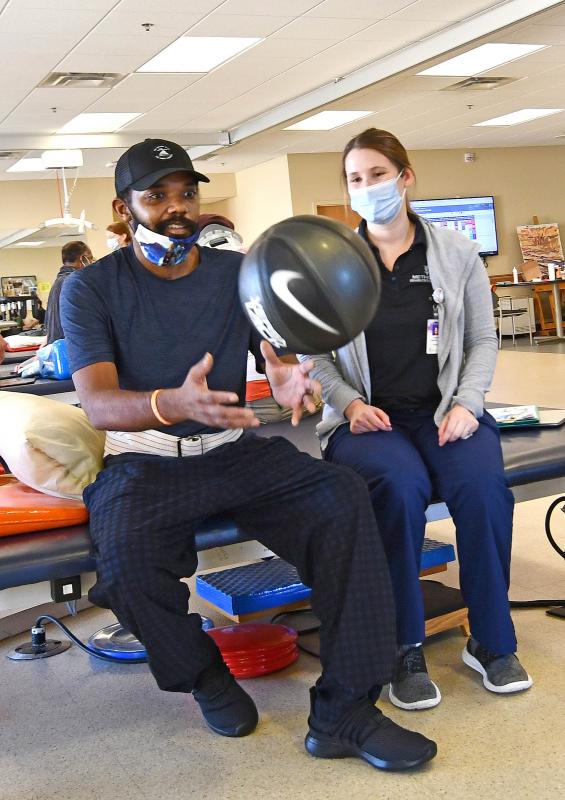 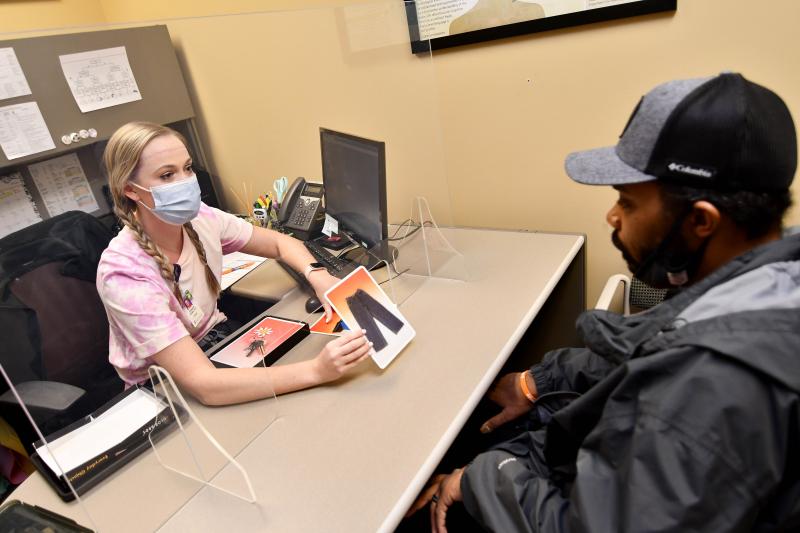 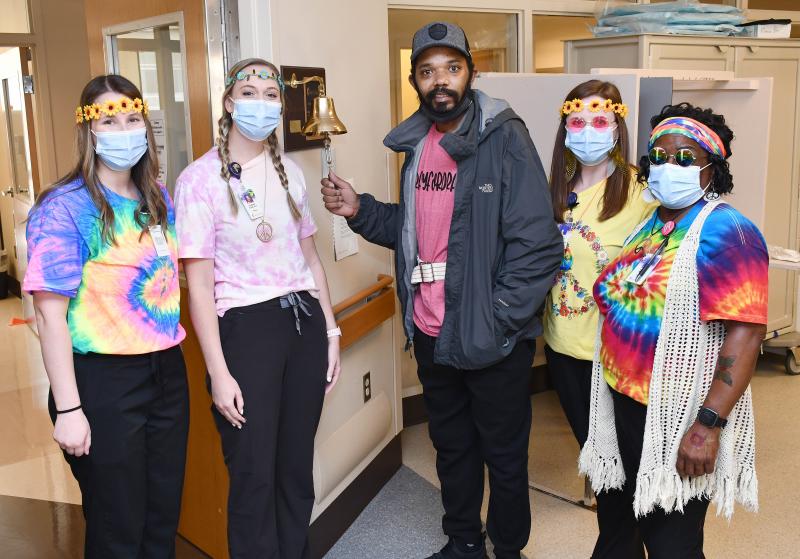 “They initially told me he would not make it through the night,” said his wife, Chastity. “They never gave us much hope, really. While we were in critical care, every day, every minute was life or death.”

Love ultimately endured brain surgery, a 32-day coma, a lung collapse and a serious infection. But he began an unbelievable turnaround after arriving at Methodist Rehabilitation Center on Oct. 1.

When he wrapped up his month-long stay at the Jackson hospital, he was walking, talking and looking forward to reuniting with his three kids, Jaxun, Jewel and Jennex.

“I thank God for bringing us here,” Chastity said. “We are so happy with everything he was able to accomplish. To go from no brain activity and no hope … He’s a miracle.”

“To make the recovery he had here in that short period of time was amazing,” said Lauren Johnson, nurse manager for MRC’s brain injury program.

“The expectations were we would get him independent so Chastity could care for him,” said Aubrey Seay, a nurse liaison for MRC. “We did not expect him to walk out like he did.”

Typically, Seay works with referral sources to get patients in North Mississippi admitted to MRC. But she first heard about Love online.

“One of my nurse friends at North Mississippi Medical Center (NMMC) shared one of his wife’s posts,” Seay said. On Facebook, an emotional Chastity was pleading for help to get her husband into inpatient rehab as soon as possible.

At the time, Love needed a trach tube to breathe and wasn’t cognizant enough to follow commands. So it was recommended that he spend time at an LTAC (a long-term acute care) facility until his condition improved.

But once Chastity heard COVID-19 precautions would prevent her from visiting her husband at an LTAC, “she was not going to have that,” Seay said.

“I freaked out on Facebook and boohooed and said: Please help me,” Chastity said. And Seay reached out.

“I felt like he was going to do really well,” Seay said. “It was an intuition thing, or maybe I was just hopeful.”

“We are so thankful because it was a fight,’’ Chastity said. “God got us to the right people.”

Love arrived at MRC needing help with everything—from staying upright in his wheelchair to remembering what had happened to him.

The trach also kept him from talking, adding to the agitation that can be common in brain injury patients. And it soon became clear he was suffering hallucinations, as well.

“He was challenging,” said MRC physician Dr. Hyung Kim, chief of the Division of Physical Medicine and Rehabilitation at the University of Mississippi Medical Center. “It was a matter of medication juggling the whole time he was here. But at the end, he was much better than before.”

Love suffered a closed head injury, meaning he didn’t have a penetrating wound to his skull. Rather, a blow to his head had caused widespread swelling that bruised his brain.

The injury happened during a nighttime ATV ride with friends. “He hit the back tire of a four-wheeler in front of him and went airborne and started flipping. Then he went headfirst into a metal garbage container,” Chastity said.

After being intubated at the scene, Love was flown to NMMC in Tupelo. There, he had small holes drilled in his skull to relieve pressure caused by fluid build-up.

“While he was in the critical care unit, it was a fight for his life,” Chastity said. At one point, hospice was presented as an option. “Palliative care would come in, and I would say: ‘Get out,’” Chastity said.

Chastity said she felt as if she was “at war” for her husband’s future, and Seay surmised she’d be equally vigilant at MRC. “I told them before he was admitted that she will be there every second of day, and she will fight for him,” Seay said. “And she did.”

Chastity said her helicopter style wasn’t always welcome during Love’s initial hospitalization. So she was thankful MRC staff were open to her input. “I would see her on a daily basis, and we would talk through concerns and if there was anything that needed to be adjusted,” Johnson said.

“It helped us be able to help him because she was such an advocate,’’ said MRC nurse practitioner Pam Jeffries. “She never seemed to leave his side and relayed everything to us. We felt comfortable because she was that caring and concerned. She would try to figure things out and say: “What about this?’ And we would try things. It was more of a team approach. And when you have someone easy to work with, you tend to get more things done.”

Chastity’s help was especially critical in the beginning. Love’s inability to speak and short-term memory loss left him needing frequent reassurance during therapy.

“She was always so calm and patient with him,” said MRC physical therapist Kaitlin Snyder. “I think that’s why he did as well as he did.”

Snyder said her first challenge with Love was his lack of postural control and poor safety awareness. He was often on the edge of his seat trying to stand up, even though he had no balance. “One day I had him on the mat for about 18 minutes, and I think I scooted him back about 30 times,” she said.

Since Love hadn’t been on his feet since the accident, Snyder first used a tilt table to get him used to being upright. Next, he practiced walking supported by an overhead harness. Then he moved on to assisted walking in the hallway. “By the time he left, he was walking without upper extremity support, with just one person assisting for balance and safety,” Snyder said.

With occupational therapist Leslie Garrett, Love went from being unable to lift his arms to put on his clothes to being independent with his morning routine.

To keep him motivated, Garrett said she chose activities using nuts and bolts to remind him of his work at Winchester in Oxford and his side job repairing cars.

“When he could move both arms, we graduated to weights and balance activities,” she said. And whenever possible, she’d pair exercises with cognitive activities to help improve his thinking skills.

“He’d bounce the basketball back and forth and call out favorite candies or different animals based on the ABCs,” Garrett said.

The fact he could talk was due to the diligence of MRC speech therapist Elizabeth Kubik and the respiratory therapists who helped him overcome the need for a trach tube.

Until it was removed, Love was limited to mouthing and pantomiming his wishes. Once he could talk, “he was just yap, yap, yap,” Chastity said.

Still, he struggled with being able to express and understand language, and he and Kubik worked extensively on word-finding and memory skills.

‘He has made so much progress,” Kubik said. “”When we first started, he was performing at about 20 percent accuracy with verbal expression tasks. Now it’s 60 to 70 percent.”

Kubik also addressed Love’s inability to swallow, taking him from relying on pureed foods to a diet of soft foods.

As he got ready to leave MRC, Love was letting his wife do most of the talking. But he interjected as she talked of how hard it had been not having him to lean on during such dire times.

“I always let him lead our household. And I was left to make hard decisions and pray I’d made the right decisions for him and our children,” Chastity said.

COVID-19 precautions meant Love could not have visits from his kids during his hospitalization. So it was a big moment the first time they saw each other through the window of MRC’s lobby.

“They were screaming and hollering they were so happy,” Chastity said. “He was telling them, I love you.”

“And that broke me up a little bit,” he said.

Chastity said she’ll never forget how her mother-in-law stepped up to care for the kids. And she’s grateful for the support of family, friends and even strangers who followed Love’s journey via Facebook.

“People who don’t even know us have done so much for my family,” she wrote on one post. “I’ll never be able to repay you for your generosity. But God, he gave my family a second chance, and we will take every day as a blessing.”

“He was truly a miracle,” Johnson said. And like a lot of MRC staff, she’s expecting great progress as he continues with outpatient therapy closer to home.

“I told him the day he left that God has big plans for you. So sit back and see what unfolds.”