‘Such a hard worker’: After losing his leg in an on-the-job accident, J. Carmen Arevalo of Pearl applies his work ethic to learn to walk with a prosthesis at MRC

Published on December 2, 2020
by Carey Miller 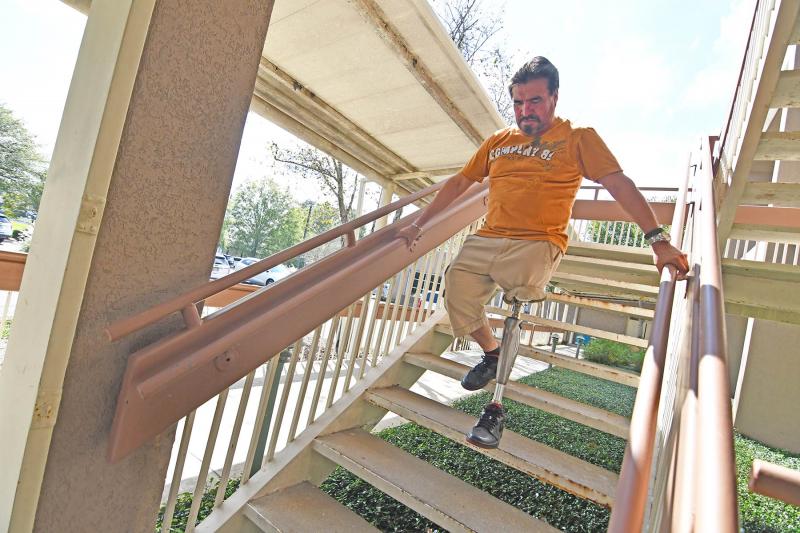 J. Carmen Arevalo of Pearl practices walking up and down stairs with his prosthesis at Methodist Outpatient Therapy in Flowood. 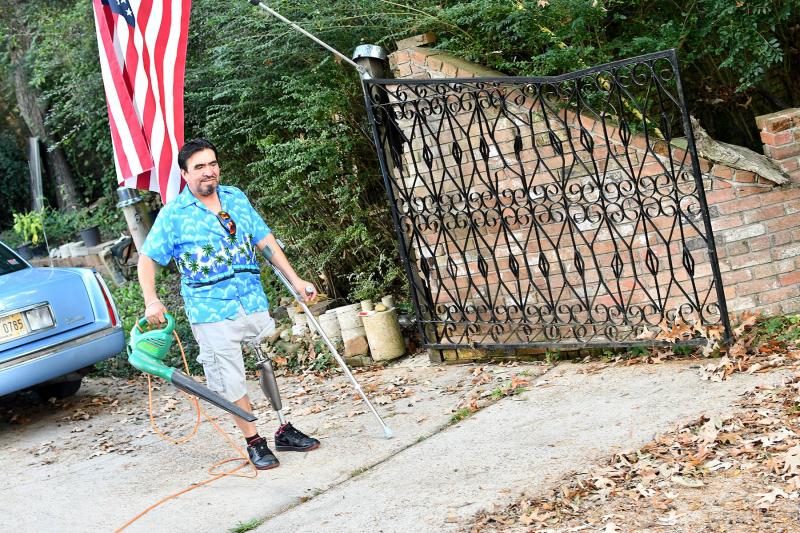 J. Carmen Arevalo is glad that his prosthesis allows him to stay active and do things like work in the yard at his home in Pearl. 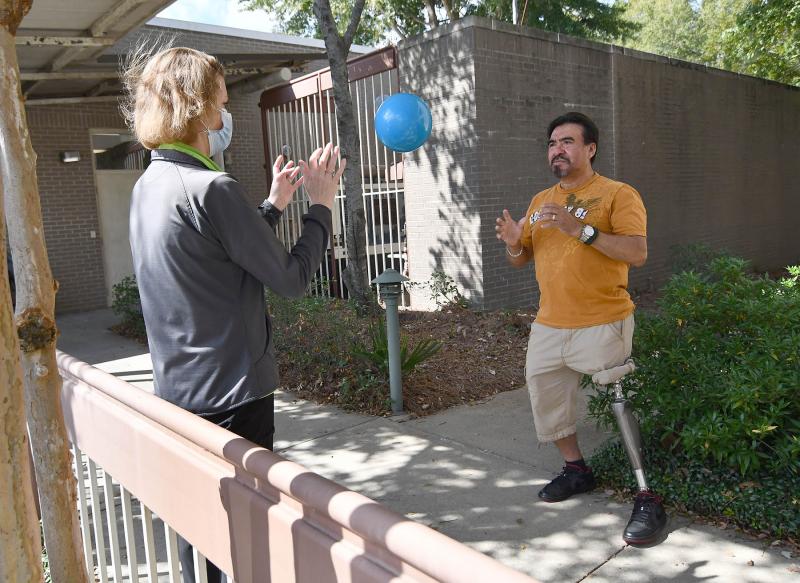 With physical therapist Karen Klein, at left, J. Carmen Arevalo worked on complex tasks while using his prosthesis, like stepping side-to-side while throwing and catching a ball, at Methodist Outpatient Therapy in Flowood.

That’s the attitude J. Carmen Arevalo took when he was told his leg needed to be amputated after it was crushed in an on-the-job accident.

And it’s the mantra he adhered to as he learned to walk again with an above-the-knee prosthesis from Methodist Orthotics & Prosthetics in Flowood. And one he repeated as he continued to amaze his caregivers at Methodist Outpatient Therapy.

“I’ve seen very few people at any age with his type of injury do what he can do,” said his physical therapist Karen Klein.

At 60 years old, Arevalo has bounced back from his life-changing injury relatively quickly. The accident happened in February, when Arevalo was cutting trees for the construction company he worked for. A tree fell from the equipment they were using to transport it, and it landed on him and fractured his left femur bone.

“I remember lying on the ground and looking at the tree on my leg and saying, ‘Somebody call 911!’” Arevalo said. “We always follow safety protocols, but accidents can happen. It was just the day for one to happen to me.”

Arevalo spent nearly two months in the hospital as doctors tried to save his leg.

“They did everything they could,” Arevalo said. “But my leg was pretty badly damaged.”

They ended up having to remove most of his leg.

“In the course of trying to salvage his limb, they had to amputate very close to his hip,” said Larry Word, a certified orthotist/prosthetist at Methodist O&P. “He’s only got between 4 and 5 inches of femur left, so he has a very short residual limb.”

After his physician cleared him to undergo inpatient rehab, Arevalo came to Methodist Rehabilitation Center in April.  There, therapists prepared him to be able to be fitted with a prosthetic device.

“I worked with him on getting up and moving around using a walker,” physical therapist Kaitlin Snyder said. “We concentrated on building up his strength in his arms and strong leg, while working on positioning and stretching his residual limb so he could retain full range of motion with it so he wouldn’t have problems down the road when he got his prosthesis.”

But Snyder knew right away he was going to do well once he got his prosthesis.

“He’s one of the hardest workers I’ve seen in the six and a half years I’ve been here,” she said. “If I asked him to do 10 sets of something, he’d do 20. He made the most of every minute he had here.”

Arevalo says although he was ready to get home once he was discharged, he was sad to leave Snyder and his other therapists. Since the COVID-19 pandemic had just begun, visitation was very limited, so they had become like his second family.

“Before, my wife had been staying with me all of the time,” Arevalo said. “And my brother and his wife and kids visited, too.”

“We always had a lot of fun with him,” Snyder said. “He’s bilingual, so he was teaching us Spanish while he was here—he really wanted us to work on it.”

They also did little things for him to make his stay more pleasant.

“I had my birthday while I was there, and all the girls brought me a cake,” Arevalo said.

When it was time for Arevalo to be fitted with his prosthesis, Word had some problems to solve.

“Having such a short residual limb poses a lot of biomechanical challenges when your goal is to get someone to walk as well as possible,” Word said. “Not just from the length, but the lack of remaining musculature available for them to control a prosthesis.”

For Arevalo to even be able to wear one comfortably, he had to come up with a unique solution.

“We often use a silicone locking liner for keeping a prosthesis on,” Word said. “We couldn’t do that with him, so we used a full suction liner, which is similar but has a sticky, tacky coating. It increases the amount of surface area we could attach the prosthesis to. That worked well for him, but also because of the length of the limb, we needed something to increases his stability. So, we used a power belt, which fits around the waist.

The main component of Arevalo’s prosthesis is an Ottobock C-Leg, which contains a microprocessor to adjust itself dynamically. It also features an Endolite Echelon hydraulic foot and ankle system.

“He’s got quite a high-quality system,” Word said. “I recommend to anyone with some balance issues to have a microprocessor knee. The technology provides the best balance support you can get.”

But while Word says he gave him the best possible tools, much of Arevalo’s success as a prosthetic user can be attributed to his drive.

“The rest of it was all him,” Word said. “Since he had worked in manual labor, he was a very strong guy. And he’s had an excellent attitude, which has helped.”

While Word was working on fine-tuning his prosthesis, Arevalo began going to outpatient therapy with Klein at MRC’s outpatient neurological rehabilitation clinic, which is in the same Flowood facility as Methodist O&P.

“It’s good that he’s doing his therapy next door,” Word said. “It’s allowed us to troubleshoot some things as we go.”

“Since he sustained such a terrible injury resulting in a short residual limb, I knew it was going to be very difficult for him to learn to walk with a prothesis,” Klein said. “But the guys next door did an outstanding job making one for him that would make it possible.”

Klein, who specializes in working with new prosthetic users, says she knew Arevalo was going to go far when she first evaluated him.

“He was just so in tune with everything, and such a hard worker,” she said. “He asked me a lot of good questions and was fully invested in the process. I always focus on starting from day one with prosthetic users taking the best steps so that they don’t learn bad habits in the beginning. And he, from day one, wanted to be his best self.”

They started with Arevalo using a walker for support, but quickly moved to using forearm crutches for balance and a better gait quality.

“He had the strength and the flexibility,” Klein said. “And he was never scared of falling. So, it was all about building confidence in him that his prosthesis would do its job. The computer in his prosthetic knee is so smart, and the prosthetists next door tweaked it to where it would correct any missteps. He quickly learned it wasn’t going to fail him. He walks so well with it that you can’t tell he is wearing a prosthesis when he has long pants on.”

Arevalo continues to go to therapy and has recently transitioned to using a single cane for balance, with an ultimate goal of not needing an assistive device at all.

And although Arevalo won’t be returning to the job he had, he’s glad to be back to helping his wife around the house and doing chores like yard work. And above all, he’s glad to remain independent. And he says it’s thanks to his new family at MRC.

“Everyone is so nice and good at their jobs,” he said. “They do everything they have to do to make you better.”