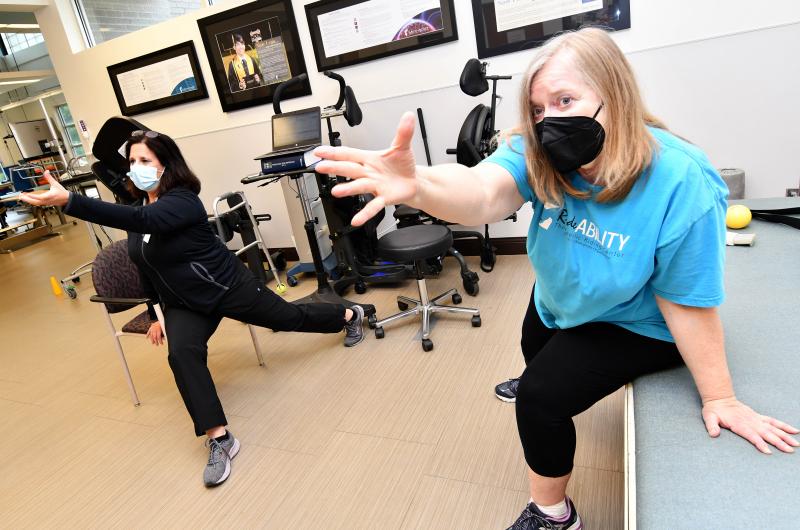 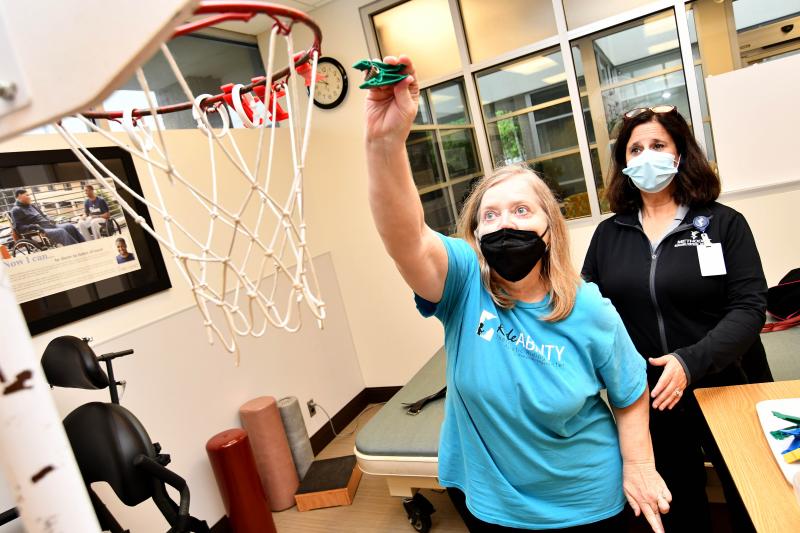 Parkinson’s patient Christy Henderson works on her balance and reaching ability under the watchful eye of Lisa Indest, a physical therapist at Methodist Outpatient Therapy in Flowood. 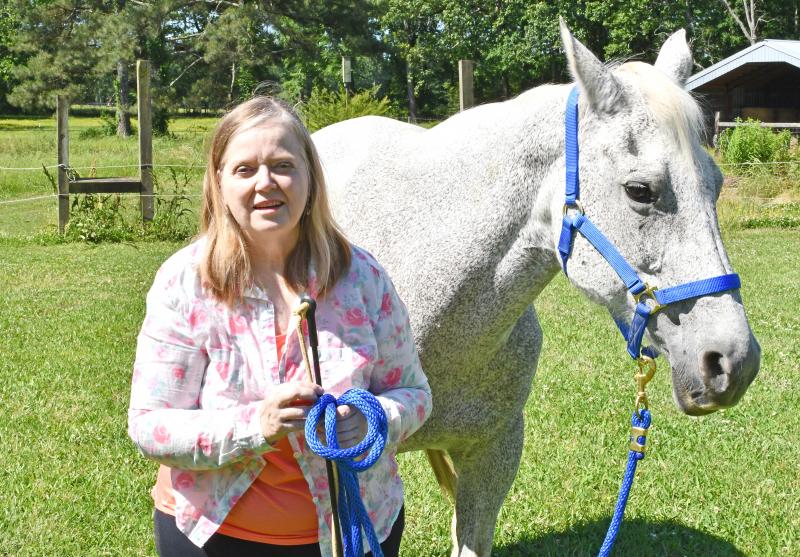 Christy Henderson began RideABILITY, a therapeutic riding program for people with special needs, because of her love for horses like Lily. “I did not grow up riding horses, but I was very attracted to them,” she said. “If I saw a horse, I had to touch it.” 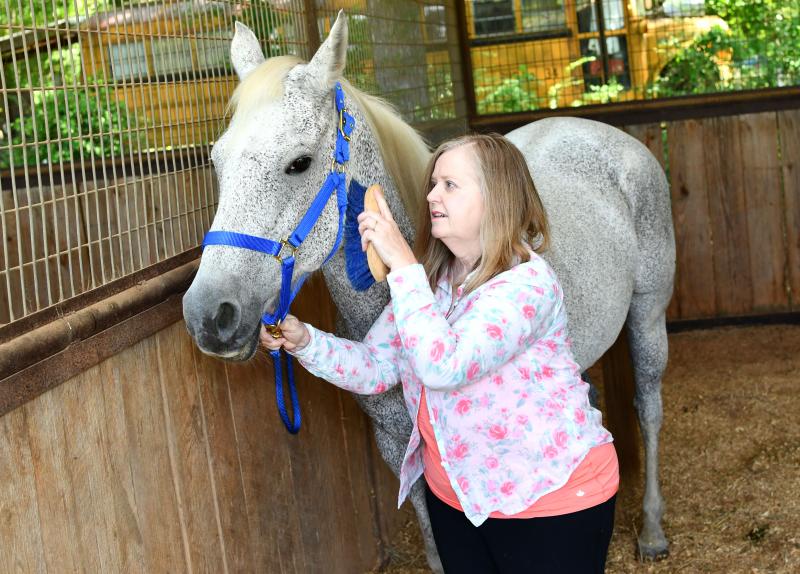 Christy Henderson of Pearl gave up horseback riding after Parkinson’s disease made it difficult to stay in the saddle.

“I get so stiff when I’m up there, it’s not fun anymore,” she said.

But Henderson still gets a kick out of helping people with special needs enjoy the sport at RideABILITY Therapeutic Riding Center in Brandon.

So when a series of recent falls threatened that pastime, Henderson took action. She started doing LSVT Big, an intense therapy program for movement problems related to Parkinson’s.

“I had an appointment with my neurologist, and he recommended I do it to work on my balance,” she said.

Henderson worked with physical therapists Lisa Indest and Karen Klein, who are among five therapists certified to lead the program at Methodist Outpatient Therapy clinics in Flowood and Ridgeland. Methodist also offers LSVT Loud, which helps Parkinson’s patients with speech and swallowing problems.

Nether program is meant to replace medications. “But it does address a lot of impairments that can get progressively worse, such as a shuffling gait, slow movements, loss of trunk rotation, postural changes and muscle rigidity,” Indest said.

It’s quickly evident why the therapy is called big. Participants amplify every exercise, swinging their arms wide and taking giant steps. It’s all designed to delay the movement constrictions that can come with Parkinson’s.

“Sometimes people diagnosed with Parkinson’s become slower and take really small steps,” Indest explained. “Mrs. Henderson has not lost her mobility. So we work on postural alignment and size of the movement.”

It didn’t take long for the therapy to deliver results. As she backed her car out of a parking space recently, Henderson noticed she could once again look over her shoulder. “I just realized I had turned my whole body, and I was like, ‘Yay.’”

LSVT Big is custom-tailored to help patients achieve personal goals. For Henderson, that meant maintaining her involvement with RideABILITY.

The 62-year-old is a long-time horse lover. “I did not grow up riding horses, but I was very attracted to them,” she said. “If I saw a horse, I had to touch it.”

After a trip to a Colorado guest ranch intensified her interest, Henderson took riding lessons and bought a horse. RideABILITY came to be after she saw a photo of a boy with Down syndrome happily sitting on a horse and holding a Special Olympics blue ribbon.

Henderson researched therapeutic riding with hopes of volunteering for a program. When she couldn’t find one nearby, she and her late husband, Dr. Harold Henderson, launched RideABILITY in 2007.

That same year, Henderson’s coworkers at Rankin Medical Center began noticing what turned out to be her first Parkinson’s symptom.

“People would say, ‘What’s wrong with your shoulder?’” remembers Henderson, then chief nursing officer for Rankin Medical Center in Brandon. “I wasn’t swinging my right arm. It was just staying in a flexed position.”

As a physician, her husband knew the connection between Parkinson’s and the loss of a natural arm swing. And a neurologist soon confirmed his suspicions. “At first, I just cried,” Henderson said. “I didn’t like the thought of a future like this. But once they put me on Sinemet, it was very dramatic.”

The go-to Parkinson’s medicine kept Henderson physically active for many years. And she needed to be. As RideABILITY grew into a six-horse center serving a variety of students with special needs, Henderson and a crew of faithful volunteers stayed busy.

“Back then, I was picking up 50-pound bags of horse feed and doing a lot of walking and shoveling horse manure,” she said. “And my doctor said keep on doing it as long as you can. But over time, I was not coordinated enough.”

Today, Henderson has stepped away from the center’s executive duties and left the heavy lifting to others. But she’s grateful that LSVT Big therapy is helping her maintain her connection to the students, who mostly have mental or physical development problems such as autism or cerebral palsy.

“They run the gamut,” she said. “We’ve even had a couple of men in their 60s who are post-stroke.”

Like her students, Henderson has learned to live with her disability. But she also embraces programs designed to limit Parkinson’s symptoms.

LSVT-Big proved to be intense, requiring therapy four days a week for four weeks, plus daily homework. And Henderson will have to keep at it long-term. But she’s enjoying the fruits of her hard work.

“I am definitely less stiff,” she said. “I feel stronger and have improved stamina. And my balance is better. I would highly recommend the program. My therapists have helped me and done a really good job of working on my problems.”

For information on LSVT Big and Loud therapy, call Methodist Outpatient Therapy at 601-936-8888.

To learn more about RideABILITY, a therapeutic riding program for people with special needs, call 601-808-2287 or go to rideabilityms.com.

“My life is nothing like it was”: Nine months post-COVID, Terry woman still pushing to overcome lingering effects of virus
“I want to do what I love to do”: Northwest Rankin teacher back in classroom after therapy at Methodist Rehab helps her overcome post-COVID symptoms
“He might not make it”: Methodist Rehab helps 24-year-old overcome damage left by life-threatening case of COVID-19
“He knows what he’s talking about”: Doctor who leads Methodist Rehab’s Recovery After COVID Clinic is fellow survivor of virus
Facial muscles on the fritz?: Physical therapy offers treatments to ease symptoms of Bell’s palsy
‘I don’t think that disability should matter’: MRC’s Quest program helps Indianola woman born with cerebral palsy get back into the workforce
'I very easily could have died': After close call with COVID-19, Indianola doctor helps MRC gather data on long-term impact of disease
The little things: Assistive Technology Clinic fits Jackson teen Adam Malone with advanced robotic arm to help weakness caused by muscular dystrophy
‘It scared me so bad’: Rare disease leaves Louisville teen tackling paralysis
“A lot to come back from”: After surviving COVID-19, Jackson woman turns to Methodist Rehab to help overcome debilitating impact of the disease
Web design and hosting by U.S.NEXT