“He might not make it”: Methodist Rehab helps 24-year-old overcome damage left by life-threatening case of COVID-19

Published on August 3, 2021
by Susan Christensen 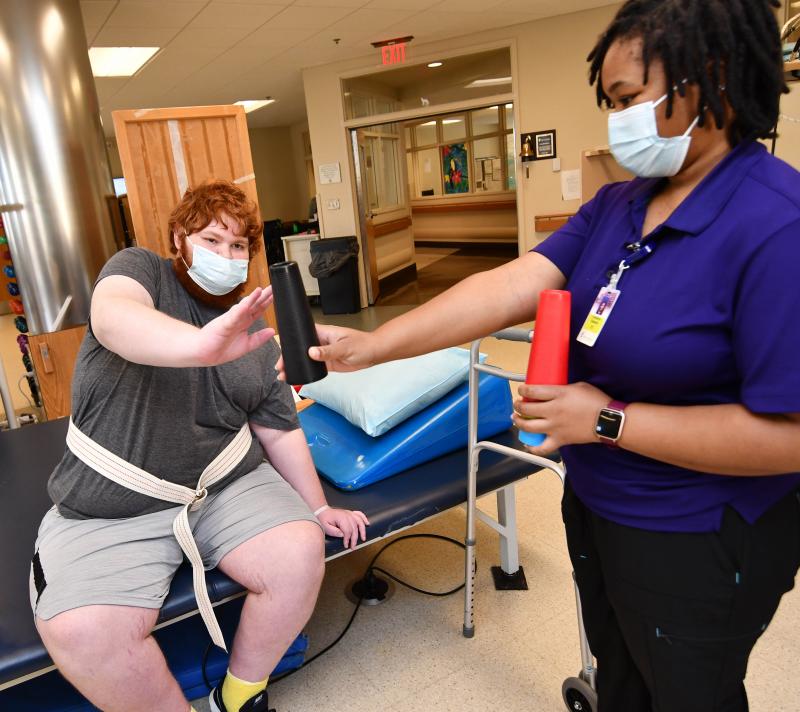 Tyshianna Edwards, an occupational therapy student from the University of Mississippi Medical Center, helps John Blackwell improve the range of motion in his nerve-damaged right arm. 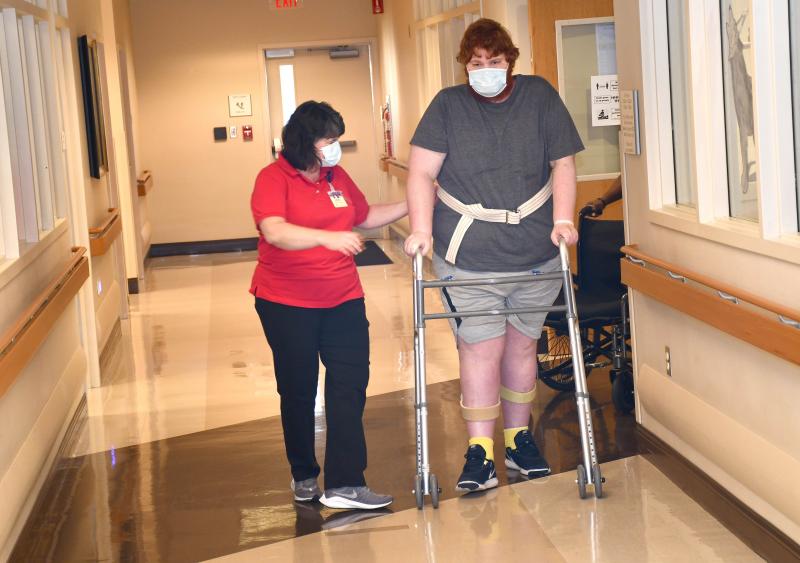 Under the guidance of Methodist Rehabilitation Center physical therapist Danae Moore, John Blackwell practices walking down the long hallways of the Jackson hospital. 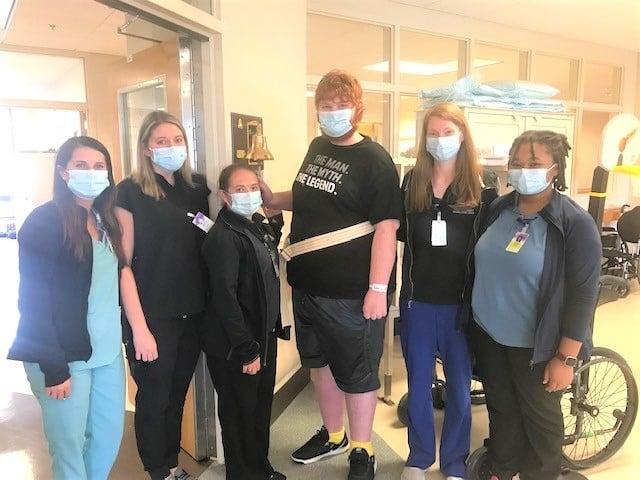 That’s what doctors told Andrea Blackwell of Smithdale as they rushed her 24-year-old son, John, to a Jackson hospital on March 18. His oxygen level was dangerously low, due to a severe case of COVID-19.

“I was bluish-gray, that’s what one of my ICU nurses told me,” John said. “Obviously, I don’t remember that.”

John spent 106 days in Mississippi Baptist Medical Center in Jackson, much of that time on a respirator.

When he left there, still barely able to walk, he hoped to continue his recovery at nearby Methodist Rehabilitation Center in Jackson. “But I didn’t have any insurance,” he said.

So his mother got emotional when she learned his care would be covered by MRC’s financial assistance policy.  “I cried,” she said. “Everybody was telling us what a good place it was and how people walked out of there.”

“Everything made him short of breath, at first,” Lahuta said. “But he’s much better and doesn’t need as many rest breaks.”

‘He got to where he could walk the full hallway with a walker and braces on his feet,” Sumrall said. “With most COVID patients, the biggest things are endurance and overall weakness. But I’ve been able to push him more than the older patients.”

After two weeks of respiratory therapy, John was able to double his lung capacity. “When he first started, he was at 1,500 on the Voldyne breathing exerciser,” said respiratory therapist Angelia Warner. “Now, he’s at 3,000, and his target volume is 3,550.”

John plans to continue his recovery at Methodist Outpatient Therapy in Flowood, and he has multiple problems to address. Chief among them is nerve damage likely caused by the weeks he spent motionless on his back and stomach while on life support.

MRC neurologist and senior scientist Dr. Art Leis, a recognized expert in neuro-muscular disorders, said the consequences of such prolonged positioning can include weakness, numbness and altered sensations ranging from tingling to hypersensitivity.

“This is very common with patients with prolonged COVID critical illness,” he said “And there seems to be something different about the nerve compression syndromes in COVID-19. Since the pandemic began, I’ve probably seen more cases of sciatic nerve compression due to several weeks kept in a supine position while on a respirator than I have seen in my entire 30 years of experience.”

Leis said John’s youth should be an advantage as he rebounds from foot drop and nerve damage in his bicep. “The window of opportunity for recovery in younger people is typically longer, up to two years after nerve injury,” he said. “But for someone 50 to 60 years old, that window may drop to a year.”

For all COVID patients suffering loss of function, Leis recommends a timely nerve conduction study. He said the results can help identify whether nerves are likely to heal on their own or whether surgery is needed to address the damage. Such tests also indicate who might benefit from assistive devices such as braces for the hand, the elbow or the lower leg.

John went home with the latter, but Sumrall predicts he won’t need it forever. “He has activation in his ankle, and he is getting his strength back,” she said.

And she’s confident his youth and positive attitude will help him persevere.

“He’s the youngest patient I’ve treated with COVID,” Sumrall said. And one of the most cooperative. “It’s always nice to have a good compliant patient that does what you ask of them. He works really hard.”

John has also benefitted from constant family support, with his mother and grandmother taking turns staying with him at night at MRC. It was a welcome change for the two, who couldn’t be by his side as he endured 50 roller coaster days in ICU.

“He would be doing good, and then all of a sudden his blood pressure would drop,” Andrea said. “Then there’d be something good, and I would be hopeful again. When he finally got in a regular room, I thought:  He’s safe.”

Andrea said the transfer to MRC was another high point. “He had just started walking, and I knew he needed it so much,” she said.

“When I first got here, the furthest I could walk was 200 feet without a break,” John said. “Now it’s 500 feet. And it has definitely helped a lot with my endurance and breathing. I can go a lot longer before I get short of breath. I’m able to stand without assistance longer, and I have more range of motion in my right arm.”

Known as Big Red to his friends, John isn’t so big anymore. During the throes of COVID, he lost 60 pounds. “I don’t recommend a feeding tube for a diet, but it does work,” he joked.

As he headed home from MRC, John said he hoped to enjoy “a big ole steak” and some Korean barbecue. And he couldn’t wait to hang out with his buddies.

“I’m looking forward to seeing more than one person in my room at a time,” he said. “I want to get together with my friends.”

As for the fight against COVID, John has some words of advice for people still on the fence about getting vaccinated. His age group wasn’t eligible for the shot when he got COVID.

“If you have a chance to get the shot, get the shot,” he said. “And if you do catch COVID, do what the doctors tell you to do. They know best. And pray. That’s all you can do.”

“And we did a lot of praying,” added his mom.

“My life is nothing like it was”: Nine months post-COVID, Terry woman still pushing to overcome lingering effects of virus
“I want to do what I love to do”: Northwest Rankin teacher back in classroom after therapy at Methodist Rehab helps her overcome post-COVID symptoms
“He knows what he’s talking about”: Doctor who leads Methodist Rehab’s Recovery After COVID Clinic is fellow survivor of virus
Pearl woman continues to teach therapeutic horse riding with help of Parkinson’s therapy
Facial muscles on the fritz?: Physical therapy offers treatments to ease symptoms of Bell’s palsy
‘I don’t think that disability should matter’: MRC’s Quest program helps Indianola woman born with cerebral palsy get back into the workforce
'I very easily could have died': After close call with COVID-19, Indianola doctor helps MRC gather data on long-term impact of disease
The little things: Assistive Technology Clinic fits Jackson teen Adam Malone with advanced robotic arm to help weakness caused by muscular dystrophy
‘It scared me so bad’: Rare disease leaves Louisville teen tackling paralysis
“A lot to come back from”: After surviving COVID-19, Jackson woman turns to Methodist Rehab to help overcome debilitating impact of the disease
Web design and hosting by U.S.NEXT