“For a patient like Reece, it was time for a place like MRC” - physical therapist, Joe Jacobson, director of outpatient rehabilitation 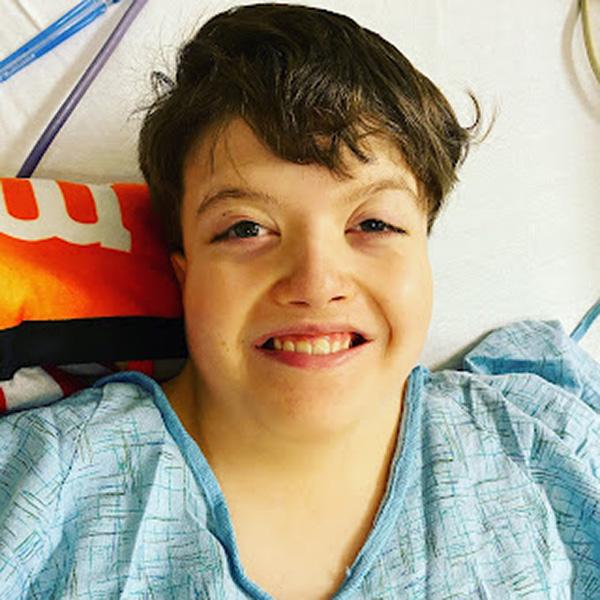 Reece in recovery department after his bilateral distal femoral osteotomy. 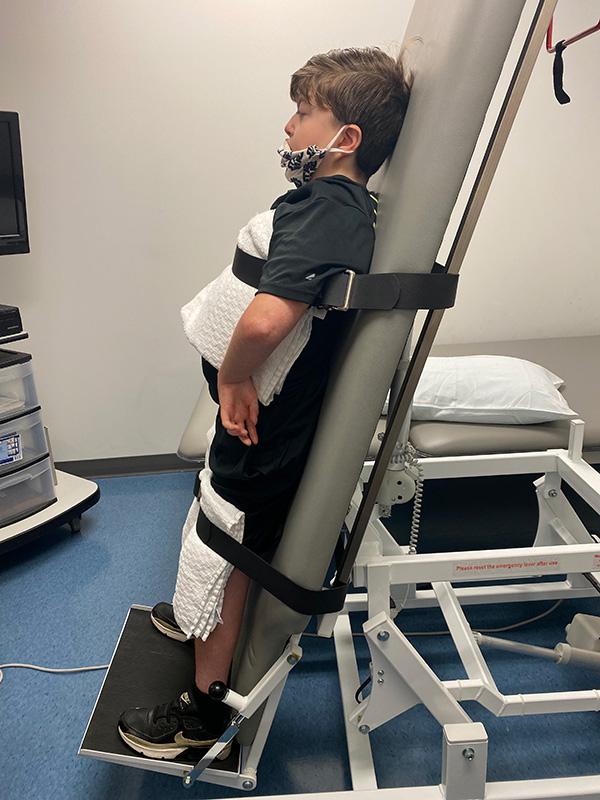 Reece at outpatient therapy practicing straightening his legs in an upright position on the upright table. 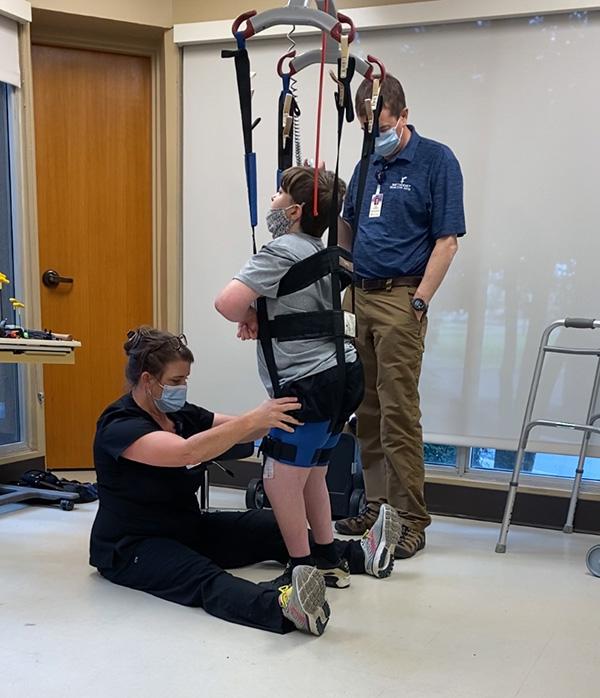 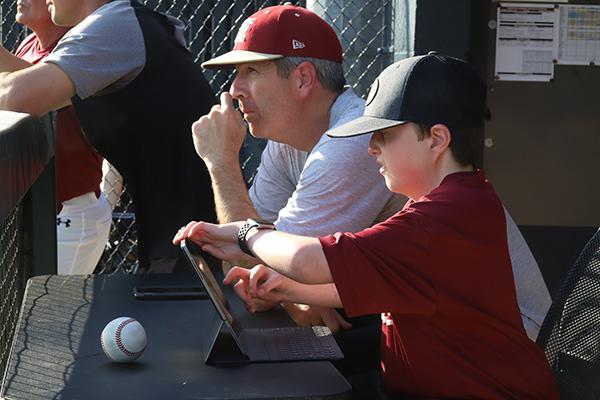 Reece Barham keeps stats for the Hartfield Academy baseball team, and he loves it.

So when a looming leg surgery threatened to keep him out of the dugout, the then 13-year-old handled the challenge like a major leaguer.

As soon as he finished the 2020-2021 school year, he underwent surgery. Then he took a no-excuses approach to his rehabilitation at Methodist Outpatient Therapy in Flowood.

“The stuff I was doing to him after surgery is uncomfortable and sometimes painful, but he never whined or argued,” said physical therapist Joe Jacobson, director of outpatient rehabilitation at Methodist Rehabilitation Center. “He is very mature and had a higher pain tolerance than most adults I’ve seen.”

Reece has Escobar syndrome, a rare genetic condition that affects his muscles and joints. As a result, Reece’s arms and legs are unable to fully straighten. On June 7, 2021, Reece underwent a bilateral distal femoral osteotomy in Memphis, TN with Dr. Jeffrey Sawyer. The surgery involves removing wedges of bone from both of Reece’s femurs, which allows the surgeon to reshape Reece’s knee joints. This reshaping allows Reece to more fully straighten his knee, which is a tremendous relief to his constantly-engaged leg muscles. Because of better bone alignment, Reece would need less energy to walk and would experience less pain. After surgery, Reece couldn’t put any weight on his legs, which was a huge adjustment for him and his parents. He was ready to get back on his feet as fast as possible.

Reece’s post-operative recovery would require therapy equipment and technology that is only available at MRC. Reece started therapy at the outpatient clinic just one week after surgery, so physical therapist Joe Jacobson started with stretching. To practice straightening his legs while in an upright position, Reece used a standing table. Reece also used the HIVAMAT (Histological Variable Manual Therapy) device, which treats swelling and soft tissue pain. Stretching muscles that have been unengaged for more than a decade certainly isn’t pleasant, but Reece was determined to make progress.

A huge goal for Reece was to strengthen his quadriceps. Before surgery, Reece’s walk was more of a shuffle, so he was never engaging his quads. After surgery, Reece’s quads would need major strengthening to perform his new walking movements. Physical therapist Molli Sorrels used the ZeroG Gait and Balance System to help Reece safely practice engaging his quads. The ZeroG looks to the average person like a harness on an overhead track, but it’s unique ability to allow patients to walk upright with little to no weight bearing down on their legs is what makes it a necessity. As Reece practiced walking and as his quads grew stronger, Sorrels slowly added back more weight until Reece was walking on his own. Reece also needed sessions at home and in the clinic with a neuromuscular electrical stimulation machine, which essentially “wakes up” his quads with electric pulses.

“I think I have probably touched nearly every machine they’ve got in there,” Reece said. And he probably did. After eight months of therapy and with the start of baseball season, Reece completed therapy. After initially worrying if he would make any progress, Reece is pleased.

“I am definitely in less pain, and I can tell my endurance is better. Before surgery, walking in and out of Kroger I would get out of breath, but now, I can go into more than one store and not be out of breath,” he said.

Beth feels that they made the right choice in choosing Methodist Outpatient for post-operative rehab, and she encourages other parents to research the type of therapy your child needs before choosing a clinic.

“I was honestly nervous about therapy because we have always worked with pediatric therapy groups,” said Beth. “Once we got in there, I saw that they really cared. They really pressed to help Reece become more independent. Joe has been steady and patient. He tried so many different things with Reece. If something didn’t work, he would try something else.”

But post-operative care wouldn’t be the only need the Barham family would address at Methodist. Assistive technology certified physical therapist, Heather Maloney, noticed Reece’s no-frills wheelchair for school and started asking questions. Reece will begin high school in the fall, and while he can easily maneuver Hartfield’s campus, his old chair would be no match for his future plans. Reece wants to attend community college and eventually transfer to Mississippi State, so with those goals in mind, he and his parents took Maloney’s advice and upgraded his chair with the help of Cook Medical Supply.

Reece’s new chair has a joystick controller that allows him to navigate as well as a lift feature, which raises him to eye level if he needs to sit at a high-top table or be seen at the front of the classroom when giving a presentation. These features are nice to have at Hartfield, but they’re a necessity for college.

“Most insurances require keeping a wheelchair for at least five years, and they usually do not allow for a new one unless there is a sudden change in condition of the patient. Because Reece has a congenital condition, his conditions likely won’t change much in the next five years, but his needs most definitely will,” said Maloney. “He will be able to keep up in the next few years, but we don’t want him to be so worn out physically that it affects how he performs mentally and with his schoolwork.”

Energy conservation is a huge factor in the surgery, post-operative recovery, and assistive technology upgrades that Reece did. Before surgery, he could walk. Before therapy, he got around. Before his new chair, he still made it to class.

“Some patients or patients’ parents are so hung up on staying active and not losing what they’ve gained that they forget the importance of energy conservation when it comes to independence,” said Jacobson.

Because of MRC and Reece and his parents’ wise choices, he is now set up to continue doing everything he did before surgery and whatever else he decides. Instead of being exhausted by the basics, Reece can plan for the future without fear.