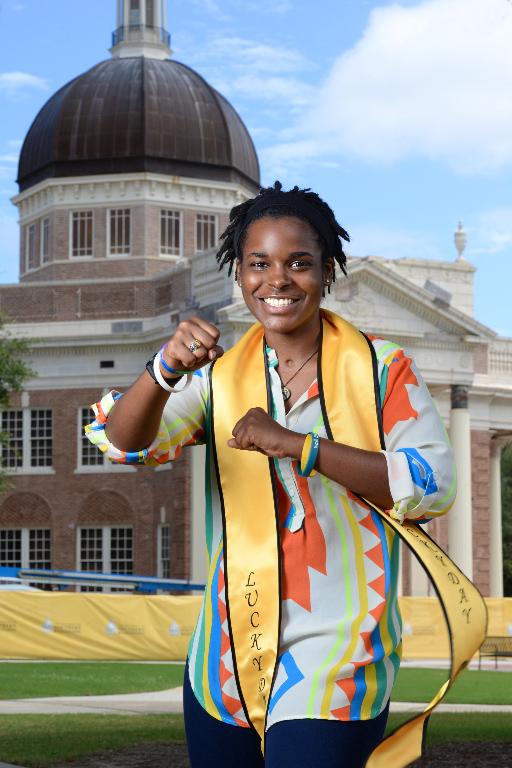 Jasmine “Coco” Whiteside, was a senior Lucky Day Scholar at the University of Southern Mississippi when she fell victim to a madness brought on by a rare brain disorder. She fought more than two years to recover and finish her degree. Now, she’s headed to graduate school at Ohio State University. 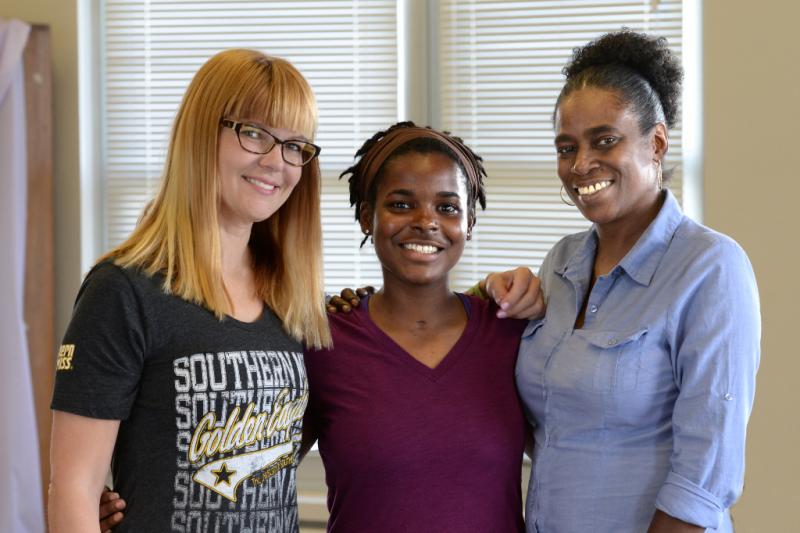 Jasmine Whiteside, center, had two strong women advocating for her recovery during a life-threatening battle with a rare brain disorder—Dr. Amy Chasteen Miller, left, her academic advisor at the University of Southern Mississippi, and her mother, Angela Whiteside. 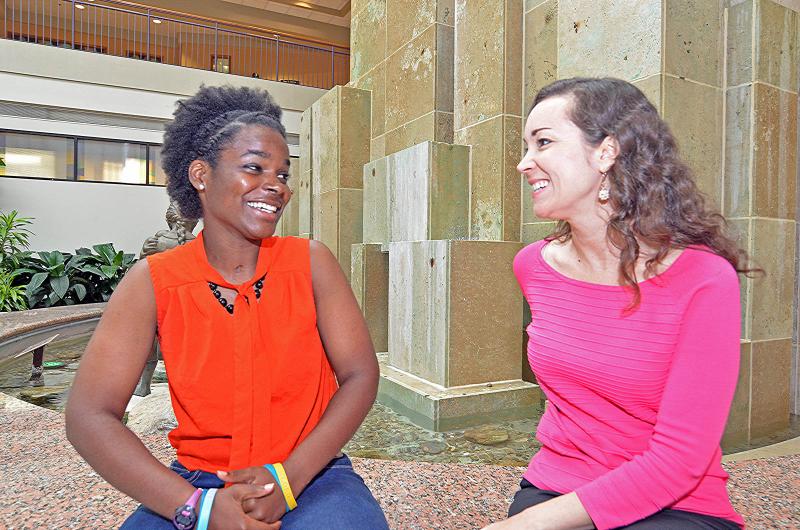 Through regular neuropsychological testing at Methodist Rehabilitation Center in Jackson, Jasmine Whiteside, left, was able to obtain an objective measure of her progress. Clea Evans, right, director of neuropsychology at MRC, said the testing helped temper Jasmine’s go-getter ambitions. “She is one of those people who wants to leap tall buildings with a single bound. And she can get ahead of herself,” Evans said. “All I did was adjust her timetable a little bit." 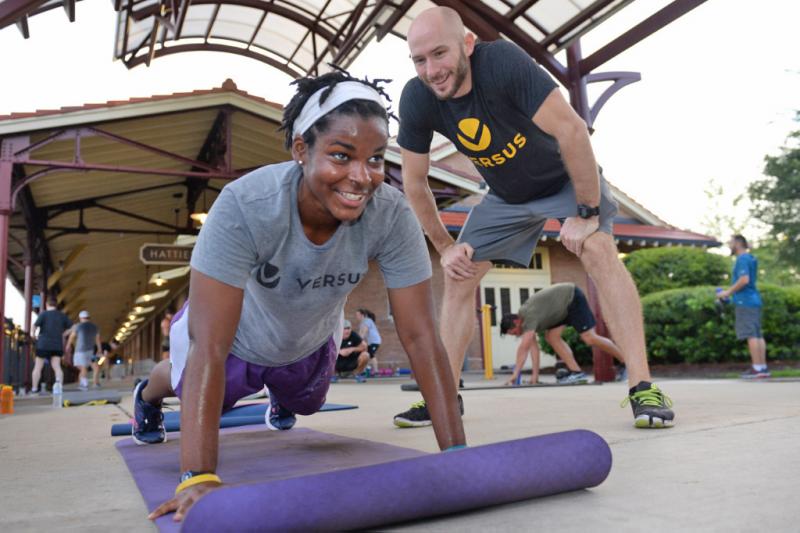 Returning to workout sessions with trainer Michael Frierson is one way Jasmine Whiteside got back to feeling more like herself.

Jasmine “Coco” Whiteside was not herself.

Usually reliable and upbeat, the University of Southern Mississippi senior had begun ditching plans with friends and texting photos of herself crying.

Her mother, Angela Whiteside, was baffled. She knew her daughter as intelligent and independent, the kind of kid who takes care of business.

“Whatever you wanted or needed, Coco was there for you,” Whiteside said.  “Ain’t nobody perfect, but she was perfect.”

And now she was a perfect mess.

“She was saying stuff that didn’t make sense,” Whiteside said. “She told one of her professors that she was chasing the sun in her car.”

On Sunday, Dec. 14, 2013, an agitated and paranoid Jasmine showed up at the Hattiesburg home of Dr. Amy Chasteen Miller, her academic advisor, mentor and friend.

Jasmine hadn’t been sleeping or eating and had a headache. And when Miller took her in, she remembers thinking Jasmine was “a good night’s sleep and a meal away from normal.”

Then things went from bad to unbelievable.

“On Monday, I came out of my bedroom and she was standing in my kitchen in her bra and underwear talking to my husband,” said Miller, a USM sociology professor and assistant provost.

“I almost fell out because there are two things Jasmine would never do—be immodest or use foul language. And she also was cursing a blue streak.

“Between Sunday and Tuesday, I watched her unravel as a person and slip into a state of apparent madness.”

The cause was as mind-boggling as Jasmine’s behavior. She had a disease that wasn’t even named until 2007.

“Do whatever it takes to save her”

But Miller sensed Jasmine’s problems were more physical than psychiatric. And a call from Jasmine’s mother confirmed her hunch.

“She was sobbing, and she said Jasmine had been rushed to the ER with uncontrollable seizures,” Miller said. “And they were trying to figure out how to get a helicopter there to fly her to Jackson.

“Her mother and I drove to Jackson together to the ICU at the University of Mississippi Medical Center. That’s where we were the next seven months.”

According to the Anti-NMDA Receptor Encephalitis Foundation, the condition mainly afflicts young adults and children and females are about four times more likely to be affected.

The signs mimic psychiatric disorders, which is why many victims of anti-NMDA receptor encephalitis are mistakenly sent to mental health facilities. Jasmine said she was actually fortunate to have had seizures because it convinced doctors her problems were physiological.

The likely cause was a teratoma, a type of ovarian tumor that can contain a ghastly collection of teeth, hair, limbs or other organ tissues.

Dr. John Parry, director of UMMC’s Division of Reproductive Health and Infertility, said more than half of women with anti-NMDA receptor encephalitis have teratomas. Encephalitis occurs when antibodies meant to target rogue brain cells in the teratoma start attacking healthy brain tissue, too.

When that happens, teratomas are typically removed. But Jasmine’s teratoma cells weren’t visible on imaging scans, which left her family facing a difficult decision.

They could have her ovaries removed, a potentially lifesaving option. But if she didn’t have ovarian teratomas, the 22-year-old would have needlessly lost the ability to become pregnant or produce estrogen.

“Estrogen levels have an effect on your heart health, your bone health and on all kinds of things,” Dr. Parry said. So once her surgery was over, Jasmine would need to begin estrogen replacement therapy.

“I told her brother the deal with the surgery, and he broke down crying,” said Jasmine’s mother. “He said do whatever it takes to save her.”

Dr. Parry also advocated for the surgery, although it was an odd position for a physician who treats infertility.

“She is the only person for whom I have deliberately wanted to take out both ovaries in the five years I’ve been in Mississippi,” Dr. Parry said. “Being in a coma and being as sick as she was, it was a last resort because she was getting progressively worse.”

While Dr. Parry did Jasmine’s surgery, friends and family gathered in an ICU waiting room. Before the surgery was over, they got the news all had been hoping for. Jasmine did have teratomas. The right decision had been made.

Jasmine would likely survive, but it would be a long time until she was herself again.

Meanwhile, vestiges of her former life began popping up in her email. Some of the nation’s most elite schools were wooing the scholar for their graduate sociology programs.

“I’ve never seen another student get the kind of offers she received,” Miller said. “I had to contact the schools and say: ‘This is going to sound crazy, but she has this rare condition and is in a coma. Could you allow her to revisit this later?’”

It’s a testament to the mind’s ability to mend and her own stubborn perseverance. She held onto her goals even when she couldn’t hold a thought in her head.

“She would clutch her tattered graduate school application forms and say: Teach me. Teach me,” said Dr. Clea Evans, director of the neuropsychology department at Methodist Rehabilitation Center in Jackson.

Coco transferred to Methodist Rehab’s nationally recognized brain injury program on May 8, 2014. And Miller remembers it as “a pivotal point in Jasmine’s recovery.”

“We had heard wonderful things about MRC and were anxious for her to get in,” Miller said. “When she was able to make that transition, it was a happy day because we knew she was going to get the care she needed.”

A former high school salutatorian with a 4.0 grade point average at USM, Jasmine was “cognitively devastated” when she entered rehab, Evans said.

“She was essentially non-verbal,” remembers Methodist Rehab speech therapist Shannon Watkins. “She could get words out, but she might look at you and say random words that didn’t make sense.”

She had favorite repetitive phrases, too, including “free me” and “Coco going forward.”

Both spoke to her desire to be on her own again. But neuropsychological tests showed she needed full-time supervision.

“My first encounter with her, she was severely impaired, confused and disoriented,” Evans said. “She could not functionally communicate or read or write, and her judgment and reasoning were impaired.”

“We tried anything to get her to successfully communicate,” Watkins said. “We would listen to her favorite artists, and she would sway her head, clap her hands and she eventually began singing along. When she left, she was following commands and singing the alphabet.”

“We were able to see she was improving, and we encouraged Jasmine and her family to keep going with the rehab process,” Evans said. “We definitely gave recommendations on how to get her back on track to graduate.”

Once she returned to Hattiesburg, Jasmine continued therapy at Merit Health Wesley. And she admits she wasn’t all that nice to those who were trying to help her—including family and friends who had done everything from holding bedside vigils to staging community fund-raisers.

“I gave them trouble,” Jasmine said. “I punched and hit and cried a lot if I didn’t get my way. I knew I was being mean, but I couldn’t stop it. I remember being angry because I was still stuck. That’s why I kept carrying those letters, I wanted to go forward.”

Given Jasmine’s go-getter personality, she needed someone to temper her ambitions. And through regular outpatient neuropsychological testing at MRC, Evans was able to provide an objective measure of her progress.

“She is one of those people who wants to leap tall buildings with a single bound. And she can get ahead of herself,” Evans said. “All I did was adjust her timetable a little bit.

“She always knew I was on her team. So if I said, ‘No, you’re not ready for this,’ she knew I had her best interest at heart, and I wasn’t trying to hold her back.”

“Everyone was interested in helping her,” said physical therapist Megan Glorioso.  “I don’t think we’ll ever forget her.”

Miller said Jasmine even seemed to charm those who treated her while she was unconscious. “I would be like: How can you still be charismatic in a coma?” joked Miller.

Miller and Jasmine’s mother can now laugh at some of the most outrageous moments during her recovery.

Once, Jasmine escaped from her home and tried to flag down motorists to take her to the University of Pennsylvania, where she had done some summer research.

Another time, she left Miller’s house on a bicycle, headed once again for Pennsylvania. “We live two blocks from a major road and my husband had to jump in his car, run her off the road, tackle her and take her back to the house,” Miller said.

All in all, “it was like raising this girl all over again,” said Jasmine’s mother. “It didn’t take a week for her to come out of Pampers, then she started walking more. Each month it seemed like she advanced.  Then she started progressing by years.”

A major advance came when Jasmine began going to adult daycare at The ARC of Southeast Mississippi in Hattiesburg. After some time as a program participant, she returned to her former role as an ARC volunteer.

Next, it was time to ease back into school, finally finish her degree and re-apply to graduate school.

While it was a risk, Jasmine was forthright in her applications. “Sometimes they want you to name a significant happening in your life. And I literally just woke up out of a coma,” she said. “I had to explain it in a way that didn’t make me feel helpless. I didn’t want them to think I couldn’t handle the program.”

At Ohio State, Jasmine said she’ll receive support services if she needs them. And she has a grandmother nearby who can help out, too.

But her greatest advantage may be her belief that she has “the drive and focus” to succeed.

“That’s something I’ve always had, even after the sickness,” she said. “I might not be at the top of my class, like I probably would have been. But I think I will be at my best.”

And so do all who’ve watched Jasmine make her comeback.

“She made dramatic improvement over a long period of time and most people would have signed off on the case,” Evans said. “To see that journey over two years was amazing.”