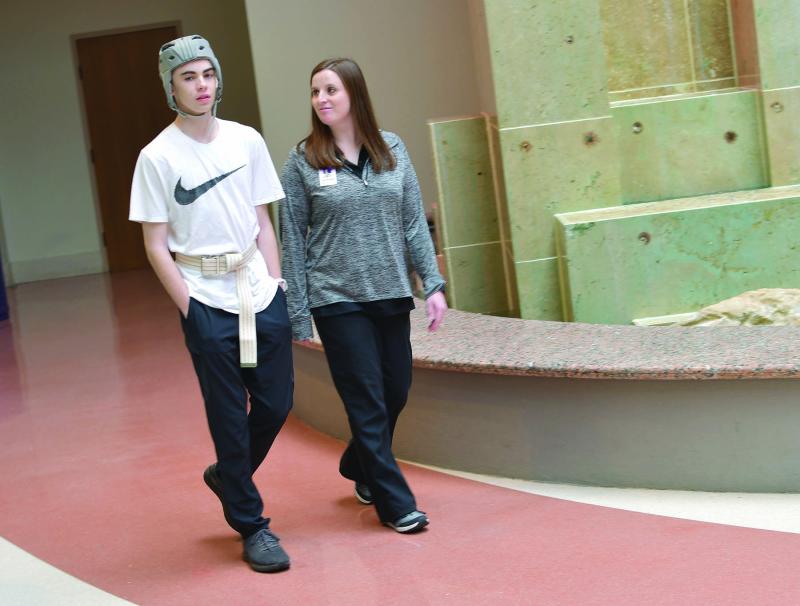 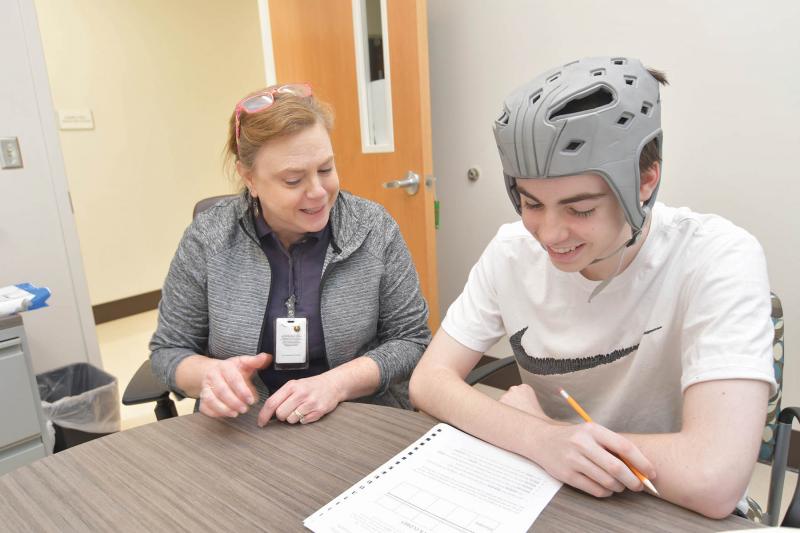 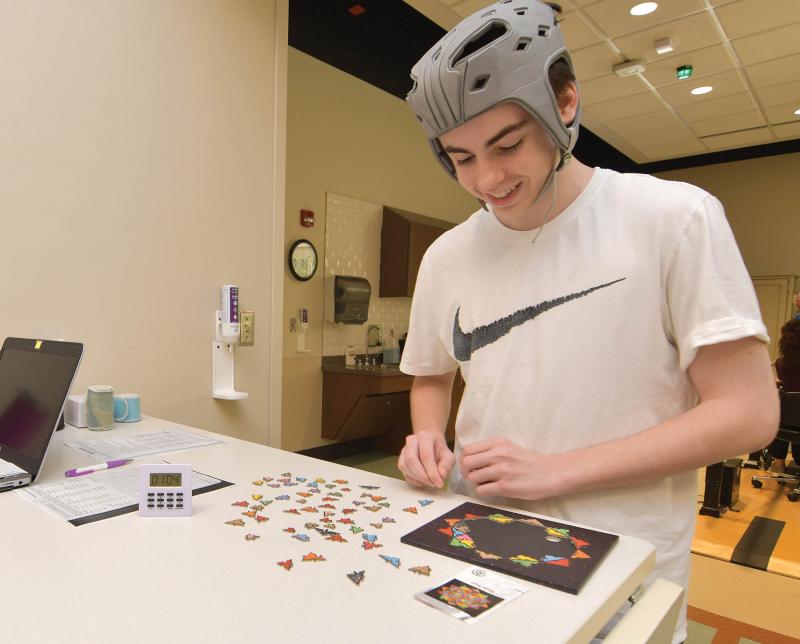 Most teens’ “what I did on my summer vacation” essays are probably about lazing by the pool, hanging out with friends or family trips to Disney World.

Connor Bready’s could be titled “I Recovered from a Traumatic Brain Injury.”

The 16-year-old from Greenwood came to Methodist Rehabilitation Center’s brain injury program on June 12 in a wheelchair. He had just had surgery that removed a piece of his skull after sustaining a head injury in a freak accident. Just 10 days later, he walked out MRC’s doors on his own, and he’s already back at school at Pillow Academy.

“We thought that he might get back to school in the spring, so that’s amazing,” said MRC occupational therapist Bonnie Lahuta. “He improved really fast compared to what we were anticipating. Usually you get a good feeling how long they’ll be with us when you see them on paper before they get here.”

Connor was injured on what seemed like just another normal summer night, while spending the night at a friend’s house on June 5.

“There were three other teenagers there, and they were all wrestling,” said his mother Sherri Bready. “Connor hit his head on a headboard. He threw up a few times, but the others didn’t really know concussion precautions, so Connor ended up going to sleep. At some point, they tried to wake him up but couldn’t.”

His mother took him to the ER in Greenwood, and he was airlifted to the University of Mississippi Medical Center. There they performed the surgery that removed part of his skull to relieve pressure on his swelling brain.

“I don’t remember much about what happened then, or when I first got to rehab,” Connor said. “The earliest thing I can remember is watching TV in my room at MRC.”

“Connor was not severely impaired, even when he first started,” Luedtke said. “But he just wasn’t yet at the level of a normal teenager. I knew he wasn’t quite ready to go back to school. So we concentrated on getting him ready for that, by working on his attention and focus.”

Connor had to wear a special helmet during his therapy to protect his head where the piece of skull had been removed.

“If he hadn’t had that helmet on—which he didn’t like—you might not have known anything happened to him,” Lahuta said.

“He was awake and alert when we first came to rehab, however, there were different phases when he was more and more with it,” Sherri said. “At first, he could stand and walk a little, but he was very unstable. Every day he got stronger.”

Connor’s physical therapist Kaitlyn Snyder says that Connor was already further along than most brain injury patients when he arrived.

“He could already transfer from his wheelchair, stand and walk. His first couple of days, he was catching his toe with every step, so we were walking very short distances,” she said. “But in a week, we were probably walking a mile at a time.”

Connor was eventually cleared to continue practicing walking after hours with his mother and father, Jonathan Bready.

“They had a really great family dynamic, and that was a big help,” Lahuta said.

“Kaitlyn had Connor walk constantly,” Sherri said. “Then I would stay with him after his therapy and we would walk all over, between Methodist and UMMC, even as far as over to the medical school. Kaitlyn and Bonnie wanted him to keep trying to increase his endurance.”

Connor was 15 when he first came to MRC, and Lahuta says working with teens has its own set of challenges.

“Sometimes teenagers can think they’re invincible,” Lahuta said. “We had to make him aware that he had new problems he didn’t have before. His balance wasn’t all there, so we concentrated on safety. And I also had to find things that would motivate a teenager. We played a lot of video games, because that’s his wheelhouse. So I would make him stand and work on his balance while we played Nintendo Wii.”

“Video games can be very helpful with divided attention and problem solving. I even let him play the Playstation virtual reality headset. In a way, that’s how I bribed him to do the tasks he didn’t care for like math. If you do this, you get game time.”

After his inpatient stay, Connor was referred to Quest, MRC’s outpatient community integration program in Ridgeland so that he could be cleared to return to school.

“We didn’t think he would have to be there for very long,” Lahuta said. “But we wanted to make sure he could make the transition back to school smoothly. He was a smart kid and made good grades, so we wanted to get him back to that.”

Connor worked with Quest’s speech therapist Cassie Means on things he might encounter when he went back to school.

“We worked on compensatory strategies for how to listen and process information in a classroom, and strategies for memory, studying and reading comprehension,” Means said.

Means also worked with Connor’s school regarding his possible need for learning accommodations, such as more time for taking tests.

“I told them he would likely be experiencing some cognitive fatigue so he should start out slow,” Means said. “He was a good student before, and I felt he would get back to it well. But it’s important to have that safety net of options.”

“He tested very well when he came in,” she said. “He had the highest balance score. So I had to keep him conditioned until he was ready to go back to school. But he still had the helmet from the cranioplasty, so I had to keep him and his family educated on avoiding activities with a fall risk. I also monitored him for any complaints like dizziness or headaches that can sometimes come later.”

Connor went to therapy twice a week for four weeks at Quest. And in mid-August, he returned to UMMC for a surgery to replace his skull.

Though Connor says his time in rehab is hazy, there are memories that stick with him.

“The thing I’ll most remember about MRC is all the people are so nice,” Connor said. “And I remember the dog (Nauvoo, MRC’s Canine Companions for Independence facility dog). I, of course, also remember getting to play the Nintendo Wii.”

Connor says he’s glad to be back home, playing his favorite video games Fortnite and Rocket League. Connor also enjoys studying history and science at Pillow Academy, where he just started the 10th grade. He admits that now that his accident is behind him, he should start looking to the future.

“I should probably start thinking about college,” he said. “Considering what my injury was, they say I’m not supposed to be able to do all the stuff I can do now. I feel like I’m really lucky.”

Sherri and Jonathan say that as parents they feel lucky, too, to have had the best possible care for Connor.

“Our family doctor told us he’s treated some concussion patients who couldn’t do at six months what Connor could do at one,” Sherri said.

“The treatment he got at MRC was great. They kept pushing Connor and kept him motivated. He’s had a miraculous recovery.”