‘I didn’t think I was going to live’: Coast retiree learns to adapt after paralyzing tree stand fall

Published on March 24, 2020
by Susan Christensen 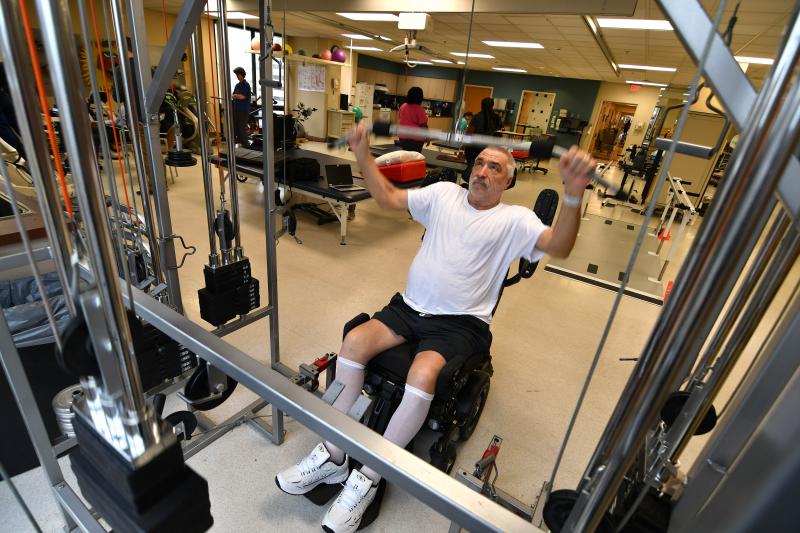 Matt Dubuisson works on his arm strength during a therapy session at Methodist Rehabilitation Center in Jackson. 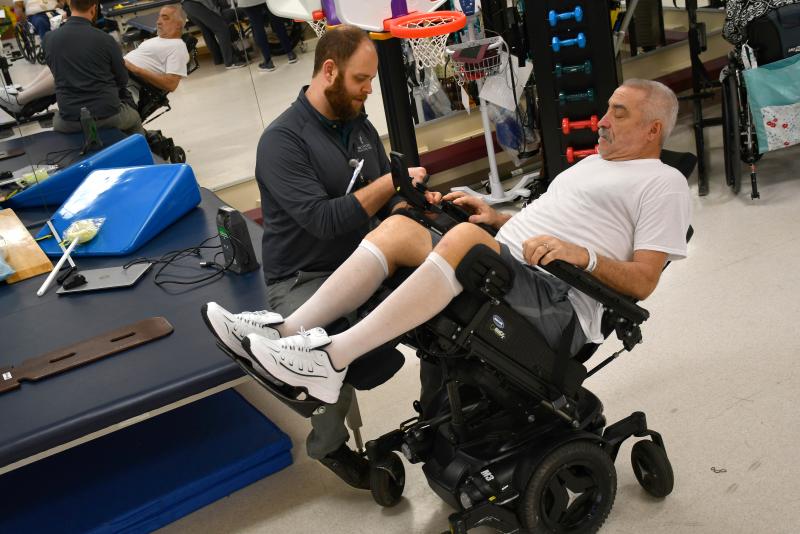 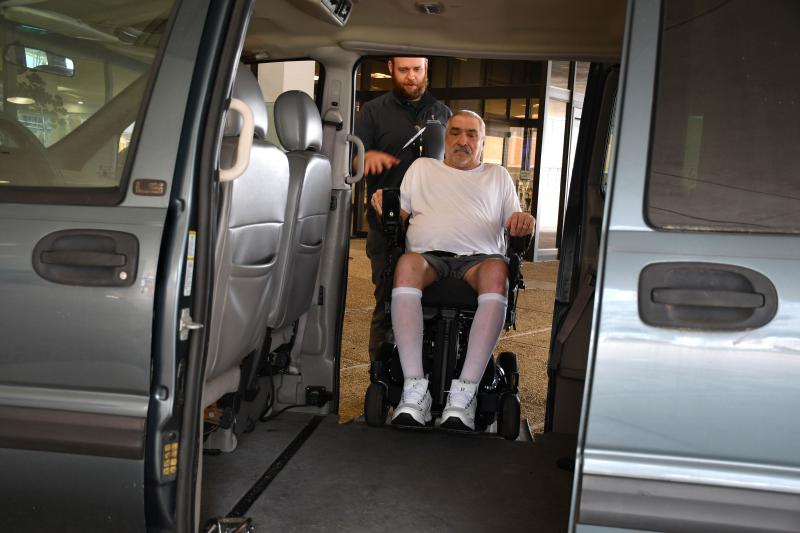 Before leaving Methodist Rehabilitation Center in Jackson on March 13, Matt Dubuisson practiced getting in and out of a handicapped-accessible van in his wheelchair.

Matt Dubuisson thought he was going to die.

The Pass Christian 60-year-old had fallen some 25 feet from a tree stand. And when he hit the ground, he “felt and heard” bones breaking.

“I knew it was bad when I reached and felt my legs and couldn’t feel anything,” he said.

The impact fractured 12 ribs, his sternum and broke his back in three places. One vertebra shattered “like a brick that had been thrown against concrete.”

“After my CAT scan, they said my chance of walking again was not good,” he said.

Reclaiming his independence also seemed out of reach. But he learned at Methodist Rehabilitation Center in Jackson that he could do much more than he thought.

“I’m coming around and feeling better about things,” he said.

MRC rehabs more spinal cord injury patients than any other facility in Mississippi, over 150 in 2019. And staff there know how damaging a fall can be.

Falls of all kinds are the No. 2 cause of spinal cord injury and the No. 1 cause of brain injury in the United States. Yet that hasn’t kept legions of hunters from seeking a birds-eye view of their prey.

According to the Mississippi Department of Wildlife, Fisheries & Parks, there were 170 tree stand incidents between 2007 and 2017.

This past hunting season, there were nine tree stand related incidents, including one fatality, said Captain Megan Fedrick, director of hunter education for the department. None of the victims—including Dubuisson—was wearing a safety harness to catch them if they fell.

A deer hunter since he was a teenager, Dubuisson admits he was complacent about safety gear. “A couple of guys I hunt with use harnesses, and I thought about it,” he said. “But I’ve done it so much, it’s second nature.”

He didn’t expect that an errant move of his elbow would knock out a pin securing his stand to the tree. “I reached for the tree, but it was too late. When I went over backwards, it was just an ‘oh, crap’ moment.”

His wife, Cindy, ran through a muddy forest to find her husband of 36 years, praying out loud all the way.

He had one request when she reached his side. “He said he wanted to talk to our girls (Meagan, 33, and Madison, 29), and I called them,” Cindy said. “He also had me call his sister, Emma Lee Ladner, his brother, John Dubuisson, and his nephew Dustin Ladner.”

At the time, Dubuisson thought it might be his last words.

“As hard as I hit the ground, I didn’t know what was hurt inside,” he said. “I thought I was bleeding. I didn’t think I was going to live.”

When he did survive, his thoughts turned to how he’d maintain his independence.

A retired mechanic for Dupont Chemical who had started a charter boat business, Dubuisson was used to being a self-sufficient, jack-of-all-trades.

But he knew he’d require specialized therapy if he hoped to reclaim his active lifestyle. And he and Cindy believed Methodist Rehab had the expertise he needed to make the best of a bad situation.

“Everybody told us how good it was,” Cindy said. “And everything has been great.”

Dubuisson’s accident happened on Jan. 8 at a Choctaw County hunting club. He was air-lifted to the University of Mississippi Medical Center and spent the next 19 days recovering from surgery to fuse his spine.

“I needed rods above and below (the burst fracture) to stabilize it,” he said.

While his fractures healed, Dubuisson wore a stabilizing, chest-to-waist black brace decorated with skulls and crossbones.

The dark design matched his feelings about the confining device. “That was miserable,” he said. “I’d throw gas on it now and burn it.”

While the brace was uncomfortable, that wasn’t the worst of it. It also thwarted his therapy progress, leaving Dubuisson doubting he’d ever be independent.

“One of his biggest struggles was that it restricted much of his movement,” said MRC physical therapist Jacob Long. “So he had trouble coming to terms with his injury.”

Most frustrating was his inability to transfer to and from his wheelchair, an essential skill learned in therapy. “I couldn’t even lift my rear end up. I was so disappointed in myself,” he said.

“But the day I got the brace off, I did a transfer before you could bat an eye. That was a super turning point in the way I thought about things.”

“When he got that off, he took off,” said MRC occupational therapist Elizabeth Hust. “He exceeded the goals I set for him. He went from needing total assistance to being able to get dressed on his own.”

As a certified assistive technology professional and seating and mobility specialist, Long was able to select a wheelchair best suited to Dubuisson’s health and lifestyle needs.

Because a friend of Dubuisson’s gave him a handicap-accessible van, Long was also able to work with him on the skills necessary to enter and exit the van. On Friday, March 13, he headed home in the van with his brother-in-law at the wheel.

Dubuisson has seen evidence he may someday be able to hunt again. He met another wheelchair user at Methodist Rehab, who had recently bagged three deer.

But whether he returns to the woods or not, Dubuisson is willing to be a cautionary tale for hunters everywhere.

“I tell them if you climb a tree, wear a harness and make sure it’s tied off going up and going down.”

Source: “The User’s Guide to The Tree Stand (Its History and Safe Use)” by L.J. Smith

“Spinal cord injury care begins at the scene” Methodist Rehab physician says rescuers helped Delta farmer avoid paralysis after truck v. tractor crash
'The Lord was watching out for me': Flora hunter grateful to be walking again after suffering several fractures in 22-foot tree stand fall
Country strong: Through therapy at MRC, Kalyn Smith strives to get back to the farm, back to college and back in the saddle after a life-changing horse-riding accident
Former Ole Miss running back tackles quest to walk again with trademark determination
Stepping up: Dr. Jennifer Villacorta named Methodist Rehabilitation Center’s new medical director
High achiever: MRC physical therapist receives 2019 ASIA Research Award
Faster and better: Methodist Orthotics & Prosthetics offers free screenings for Bioness L300 Go, an advanced neuroprosthetic device for controlling foot drop
‘I did what I was supposed to do’: Meridian athlete Alixus Hearn sets goals, gives it her all to overcome paralyzing spinal injury
‘Such a blessing’: For spinal cord injury survivor Brad Stubblefield and wife Kristan, having children has brought joy along with a unique set of challenges
‘Every muscle in my body was paralyzed’: Methodist Rehab helps John ‘Bones’ Cossar reach goal to play golf again
Web design and hosting by U.S.NEXT